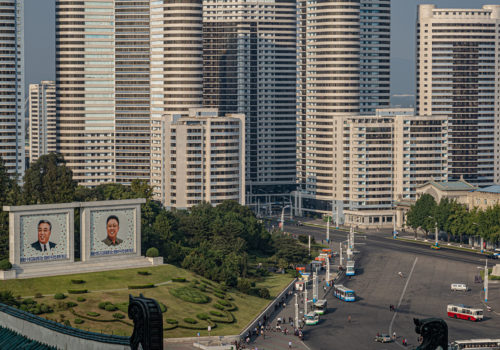 “What I offer you here is my perspective of North Korea. It is a beautiful land, and a land with a beautiful people … Yes, it is being held back by its political system and nuclear ambitions, but its people are not responsible for that. So, let’s turn our eyes from politics … I hope this glimpse into the lives of North Korea’s citizens will open your mind to this country and show you that it is not just about what you see in the news.” – Ted Lau

Hong Kong based artist Ted Lau was always curious about North Korea having grown up seeing daily headlines about missile tests and nuclear weapons. It was after discovering Andreas Gursky’s work in North Korea that he decided he had to visit the country to document it for himself. In 2019, an opportunity arose, and he embarked on an exploratory journey that took him to the capital city of Pyongyang, and to the countryside.

In Work Will Set You Free (Daylight, May 2021) Lau peers behind the curtain of this secretive, totalitarian country to find out what everyday life is like for the people. Unable to leave their country, or even travel within it, they live and work in a carefully curated bubble which Lau sought to penetrate with his camera. He knew it would prove challenging. Throughout his travels, he was always accompanied by two polite minders/tour guides who controlled where he went and what he was allowed to photograph.

The texts in the book include an introduction by Lau, a foreword by Yu-Ting Cheng, a fine artist based in Taipei, Taiwan who accompanied Lau on his trip, and Zahra Amiruddin, an independent writer, photographer and educator based in Bombay, who provides a running color commentary about North Korea’s complex history, the state of the country today, and the people and places Lau encountered during his visit.

During their trip Cheng and Lau rarely engaged with the Korean people except for their minders and tour guides. In her foreword, Cheng recalls how after visiting the International Friendship Museum in the North Pyongan Province, Lau asked their guide if they could stop to check out a pavilion by the river. He hesitated at first, but then agreed to set them free to explore. They found a few middle-aged men relaxing on a bench who waved and said hello to them. One of the men exclaimed “Our Country is Beautiful!” and they all laughed together.  Cheng concludes, “North Korea is a unique place with a great people that we outsiders will never be able to see and comprehend fully. But seeing the beautiful moments that Ted captured will give you a glimpse into what it is like in this often-misunderstood country.

Hong Kong artist Ted Lau (b. 1989) is an award-winning fine art photographer. Growing up in Hong Kong, Lau  started taking photographs when he was 11. Being brought up in a city where the East meets West, his works have a strong influence from both sides of the world. He later studied in London, where the western aesthetic made a further impact on him and his artistic perspective. Being a self-taught artist, Lau loves to capture tranquil moments that are lost in a second. As his technical skills grew, he found ways to express beauty as he sees it. For Lau, beauty is a feeling; everything has to come together to produce an image that captures a fleeting moment of perfection. He has produced works that were recognized in competitions, and he continues to travel around the world, striving and looking for that inspiration. For more information, go here.