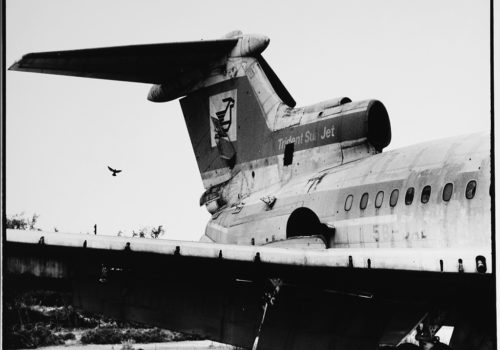 Buildings are commonly perceived as being very permanent, not only because of their structural integrity, but because they give us a sense of belonging (houses, shops etc.) or they connect us with our history or social origins (churches, historical monuments). For this reason we are equally fascinated and disturbed when buildings are destroyed, sometimes by natural disasters such as earthquakes, or by man made consequences as in the case of wars. Whenever such disasters occur it is the political will and prevailing economic conditions that usually determine the rate at which reconstruction takes place. In general the desire to rebuild after a war or cataclysm is quite strong and possibly reflects humanity’s desire for progress and development. The nuclear disaster of Fukushima is one such case of rapid reconstruction, and may be interpreted as a bid to forget and to move on. By contrast earthquake victims in less developed countries may spend several years in emergency camps before any rebuilding gets under way. The social and economic consequences of war are very different from those of natural or industrial disasters and the case of Cyprus is compelling because the war of 1974 has until today not been politically resolved. For this reason the war of 1974 has held the country in a kind of emotional stalemate for forty years.

In my photographic essay on Cyprus I have endeavored to document this state of emotional stalemate through the lingering remnants of military activity and abandoned vernacular architecture. Uninhabited or partially demolished, these structures serve as uncomfortable monuments of Cyprus’s recent history. Unlike the monuments we erect to commemorate the victims of wars or of great battles fought, these ruins seem to silently and painfully commemorate the thousands of broken dreams of a peaceful Mediterranean island.

In his essay entitled Temporary Ruins the Japanese photographer Ryuji Miyamoto speaks of a “…time tunnel that releases individual structures from their original purpose, and thus brings the buildings into existence.” In Cyprus homes that were the nests of families have mutated into a new existence as testaments of social displacement. Disused military installations become monuments of conflict and battlefields where hundreds of soldiers fell are transformed into green parks of an elusive peace.

The exhibition being proposed for the 2014 edition of Mois de la Photo is a collection of photographs taken in Cyprus since 2009 and which have never been exhibited or published before. The prints are all hand printed by the photographer on silver gelatin paper.

David Pisani is a professional photographer specializing in Architecture and urban reportage. He is the author of an extensive photographic essay on Valletta entitled Vanishing Valletta which in 2000 was included in the permanent collections of the Bibliothèque Nationale de France. Vanishing Valletta was also published as a monograph in 2007. He has also produced a photographic essay on the city of Dubai entitled ‘Future City’ which was commissioned by Emirates Airlines for their corporate art collection. His most recent work includes two photographic essays on Cyprus and Kyoto, in both cases documenting the urban landscape in its complex reality. He is a prolific darkroom printer with more than 25 years experience in commercial and fine art printing.

BROKEN DREAMS was exhibited in March 2017 in the official program of Pafos 2017 European Capital for Culture.