Damiani : Steven Thackston : Flowers in a Thorn Tree: On the Road with the Warriors for Peace and Wildlife 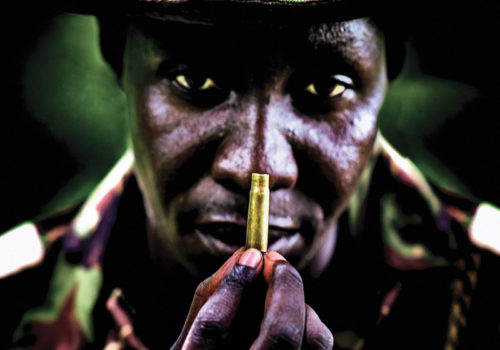 Flowers in a Thorn Tree: On the Road with the Warriors for Peace and Wildlife, is a nonlinear picture-story about a group of wildlife conservancy rangers in northern Kenya.

With any project of this sort, access is always the key and after diligent research and countless email inquiries to conservancy organizations across the African continent, I was granted permission to embed with rangers from the Northern Rangelands Trust in Kenya.

In this I was very lucky, as the NRT is a very forward-thinking organization, with ranger groups working both on wildlife conservancies and also within the pastoral communities where people still live among the wild and endangered animals.

Ranger units average about ten men and traverse through these communities on troop-carriers, checking with local contacts about herd movements and potential poaching rings. They act as peacekeepers within these communities, as a happy community is less likely to feel the need to poach an elephant or a rhino. Over the years, the ranger’s community outreach efforts have begun to change the attitudes of the pastoral people in regard to the animals. I saw the results of this effort, witnessing local people calling on the rangers when they had a problem with an animal, rather than taking actions themselves, which generally results in an injured or murdered animal.

In the book, there’s a photo of a man in a tree, holding a dead cow’s severed head. An elephant had killed his cow. In the past, he would have killed the elephant. But he’d heard about an NRT program that would pay him for the loss of the cow. The rangers made a ten-kilometer trek through the bush to meet with the herder. They made arrangements for the herder to get paid. He agreed not to kill the elephant.

The ranger’s work also puts them in harm’s way when they track and confront poachers. I have been with them as they chased murderous bandits through the dust and the heat and the thorns of the bush as fast as they could push themselves. I have been with them setting up an ambush in the shimmer of moonlight. Along the way I also found myself among the pastoral people, the town folk, the buildings and the food and the animals. As a Caucasian man, I was a walking oddity, and it was a constant challenge to find the space to capture honest and true moments among these beautiful people and places. But I did. Above all, I tried my level best to remain culturally sensitive, not only with the rangers, but with the pastoral people as well.

Living with the rangers, I ate what they ate and slept where they slept and kept up with them on long, dusty patrols. Before long, the rangers accepted me and forgot about my camera, allowing me to capture real and true moments in the field.

Soon the nature of these men was revealed. They understand the responsibility placed upon them and they truly believe in their work with the animals. They are natural people. They have not lived lives inundated with advertising and the stress and expectation that comes with that. They are tied to the land beneath their feet. And while they are, “Armed commandos,” ready to go into action at a moments notice, they are totally lacking in the instilled, forced bravado one associates with commandos in western military services. Their work is difficult and demanding, but they remain joyful and kind.

Early on I decided to capture an expansive and organic view of the rangers and their working world. I didn’t feel the need to direct the viewer of these images toward a particular conclusion. My goal from the beginning is to foster curiosity. I intend to give the viewer the experience of seeing the world through a ranger’s eyes.

I believe the rangers have one of the most important jobs in the world and they are succeeding. If future generations hope to have a planet where animals are thriving in the wild, it will be because of their efforts.

They represent the hope for positive change in the tangled problems facing African wildlife. They are like flowers in a thorn tree.

Flowers in a Thorn Tree: On the Road with the Warriors for Peace and Wildlife