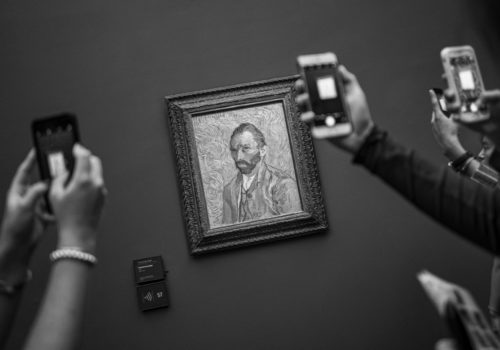 The Van Gogh Affect, an exhibition addressing the artist’s profound and ever-present influence on contemporary perceptions of the world.

Traveling in Van Gogh’s footsteps, Lynn Johnson and Patricia Lanza have conjured hauntingly intimate images in black & white (Johnson) and impressionist-imbued color (Lanza) in their exploration of Van Gogh’s quest to master the use of color as he studied, tracked and paid tribute to his most enduring muse— the sun.

Working in collaboration with the Saint-Paul Asylum in Saint-Rémy, Johnson & Lanza were granted special access in their retracing of Van Gogh’s time spent in the still-functioning sanitarium and the village of Auvers-sur-Oise where he died under mysterious circumstances in July of 1890.

The Exhibition opened at the Leica Gallery, Los Angeles in 2019.

Snap! Orlando: Exhibition on view through May 2021.

How did you prepare for the National Geographic Magazine assignment story, twenty-two years ago, on Vincent van Gogh, which provided the foundational imagery for the development of this exhibition?

How did I prepare? I read. I read every letter, note, scrap of information written about or by Vincent.

It was in the immersion of that material that I was able to launch into the experience of following him—his spirit and creative life—in real time and space. I had to try to suspend time for myself in order to do so for the reader / viewer as well, and so, embraced the idea of using specific qualities of photography which were perfect for this challenge. I chose to use the language of black and white to disconnect from modern times, to avoid showing any object or suggestion of modernity, and to seek out people who still embodied the traditional ways and lifestyles that may have been fully alive during Van Gogh’s lifetime.

Photographers never work truly alone. We carry who we are—burdens and gifts—into every assignment. And we also have the help of other professionals, experts and those who love the subject matter we are trying to understand and explore. I had the help of a wonderful young Dutch interpreter, Merle Van Neerbos, an artist herself and speaker of 3 languages. She helped me bridge both the language and creativity divides that appeared as chasms on a daily basis. We walked, explored, sat in cafes, read letters between Vincent and Theo out loud, argued about how Vincent might have felt about this color or that cell in St. Paul’s Asylum.

When one engages in an assignment for National Geographic, one enters into a relationship with both the dead and the living. It is complex, mysterious and fuel for one’s creative inner life. But what must never be forgotten is that you are using all those life experiences in service to the reader. The ultimate goal is to share, explain, reveal the moments and material you have discovered. Therein lies the grace of the story.

For the Van Gogh Affect series what were the recent findings photographing in 2018 and 2019, that contributed to building the story and the exhibition?

Returning to the field to pick up the thread of Van Gogh’s life after almost 25 years away was daunting. In fact, I realized that Vincent had never been far away in those intervening years. He is everywhere, which is what makes this project so meaningful for so many people around the world.

to step out of the more formal way of National Geographic storytelling and entering into a new way of looking at the path of Van Gogh. I used phone apps and small plastic camera to create more dreamy images—staying true to the original idea of living in suspended time.

Also, in the intervening years, I had grown in my passion for documenting issues of social justice—particularly the systemic, global inequality and violence experienced by women. Working with the women who come to St. Paul’s Asylum, now a facility that exists specifically to help women with mental health issues, was the most rewarding part of returning to this project. In the year that Van Gogh lived in the asylum, he produced almost 150 works of art.

Vincent, his spirit and influence, are still very present in St. Paul’s. Many of the women who come there for protection and healing paint in the atelier developed over 20 years ago by the director, Jean Marc Boulon, who first allowed me to enter with a camera. The atelier, named Valetudo after the Roman goddess of healing, gives women a chance to explore their trauma through art, without judgment. Creativity becomes their path for insight and transformation. Listening to and photographing these courageous women was a powerful force that I feel, produced images of those who are closest, physically and in spirit, to making art in the footsteps of Vincent van Gogh. These women, some of whom may be too fragile to survive in the outside world, are aware of the connection between creativity and mental health. They paint not as therapy, but to discover and confirm their identities, unmoored by trauma or biology. They are by turns, tenaciously individual, then a protective community who depend on each other to stay anchored in reality. They paint in the very rooms and gardens that inspired Van Gogh.

Many of the women speak of Vincent as an inspirational force in their art and lives. One patient affirms the presence of his spirit in these ancient halls when she says, “Painting is for me a space of rest and freedom. When I don’t paint, I don’t feel alive. I feel empty. When I paint, I beautify the world. I give gifts. I belong to the world.”

Since I came late to this project and with a limited time, I decided after much research to focus on Van Gogh’s time in France, the last few years of his life and where he created many of his masterpieces. It was here that his color pallet became brighter and I decided to shoot in color.

Making two trips, one in 2018 and 2019, by following Van Gogh’s footsteps through France the challenge was to present a time and place where he lived, worked and died. Many of these places have not changed in over one hundred years but modernity creeps in and in order to eliminate that I had to shoot at the edges of the light and at times when people were not present or the focus. New findings kept appearing in the news about Van Gogh over recent years; for example, the almond tree from the Almond Blossom painting existed. I had to seek out the tree as it would be over one hundred years old by retracing his footsteps and knowing how far he could venture from the Asylum at St. Remy in France. I found that stand of trees, and it was verified by the Director of the Asylum at St. Remy where Van Gogh produced the painting.

I also had to look for the small details and clues to his way of working.

The Auberge(Inn) where Van Gogh died in Auvers-sur-Oise is a fine restaurant and the room where he passed remains the same unchanged since his death. When we dined in the restaurant, I took a picture of the tablecloth ( a red-striped tea towel), not knowing that when he ran out of canvas he used this to paint The Garden at Daubigny. The back of the painting in the Van Gogh Museum shows the tea towel. Just this year in the Art Newspaper, a postcard of Van Gogh’s time revealed the road showed ‘tree roots’ the same as shown in his painting of Tree Roots, which might have been one of his last.

There is an ongoing mystery surrounding his death, the general consensus is that he committed suicide, the biographers Naifeh and White Smith state, “All that can be said is that he died of a gunshot wound that he sustained in or near the town of Auvers.” The cause of death remains in dispute. He produced 2,100 artworks some 900 paintings much of these in the last two years of his life.