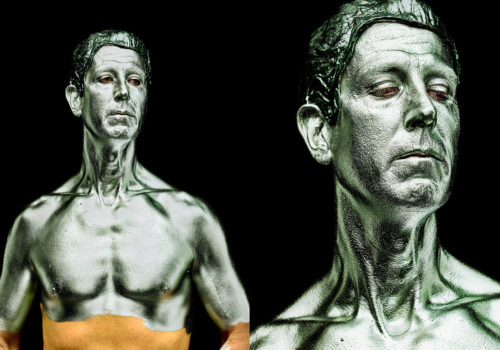 A “polymath” is the rare individual whose knowledge spans a substantial number of subjects, one who is able to draw on complex bodies of information in order to solve specific problems. In the case of fine art and portrait photographer Matthew Rolston, think of an artist whose practice spans the gamut – magazine covers, advertising, creative direction, music videos, publishing, education, and now, personal fine art projects.

After he was “discovered” by none other than Andy Warhol for Warhol’s Interview magazine, Rolston went on to work extensively for other prominent publications, such as Vogue, Vanity Fair, Harper’s Bazaar, and over a hundred covers for Rolling Stone.

Rolston has many disparate projects in seemingly unrelated fields – from the gallery wall to creative direction for some of the world’s leading hoteliers – all of which are united by a powerful sense of what he calls “romantic notions about humanity.” Just take a look at his website (matthewrolston.com) and you’ll get the idea.

Rolston’s latest endeavor is an expansive exhibition at Laguna Art Museum in Laguna Beach, California. It’s called Art People: The Pageant Portraits and was curated by Dr. Malcom Warner, the museum’s former executive director. It opens June 27, 2021 at this prestigious and historic museum. Eighteen large-scale works, some made of multiple panels, fill the galleries of his solo exhibition, accompanied by a lavishly illustrated catalog. The most awe-inspiring of Rolston’s works is comprised of twenty-six individual photographs and commands over thirty feet of wall space. It’s entitled The Last Supper. Coincidentally (or perhaps not), the final work of Rolston’s mentor, Warhol, was also entitled The Last Supper.

The exhibition showcases Rolston’s larger-than-life portraits of the volunteer actors who pose on artfully crafted sets in shimmering costumes and makeup to embody “art people,” that is, the figures in well-known works of art brought to life in an annual tableau vivant entertainment called Pageant of the Masters. This elaborate, and perhaps eccentric, production is a beloved Southern California tradition that has taken place every summer in the art colony of Laguna Beach for over eighty years.

Rolston attended Pageant of the Masters many times with his family as a child and remembers being overwhelmed by “the theatricality of it all.” He has said that being exposed to the Pageant as a youngster was a pivotal moment leading to his career as an artist.

Searching for a photographic subject to express ideas about artmaking and its place in the human experience, Rolston returned to the Pageant in 2015 on assignment for the Wall Street Journal. Far from creating the works currently on display, Rolston was tasked with documenting the Pageant process backstage which gave him the unique opportunity to meet the Pageant’s creators. That first meeting led to him eventually receiving rare access to the pageant performers in order to create the body of work he now calls Art People.

In Rolston’s brilliant, richly hued portraits, he offers not only a deeply poignant and personal account of Pageant of the Masters and its participants, but also underscores the uncanny ways in which these works bring out fundamental aspirations of the human spirit and its underlying impulse towards art creation.

Said curator Warner, “By isolating his subjects, and presenting them in such high definition that the painted-on brushwork and patinas reveal themselves as the makeup that they are, Rolston brings out the strange, melancholy poetry of real people impersonating painted and sculpted ones.”

Laguna Beach’s Pageant of the Masters is in itself an incredible meta-journey into art making. It’s a form of art about art about art. So is Art People. “It’s a kind of hall of mirrors,” notes Rolston. “Art People is also a document of people. These are, after all, portraits of the volunteers who perform in the Pageant. They themselves are Art People.”

Matthew Rolston’s Art People: The Pageant Portraits is on view from June 27th to September 19, 2021, at the Laguna Art Museum, located at 307 Cliff Drive, in Laguna Beach, California.

Patricia Lanza : Can you explain the nature of your exhibition?

Matthew Rolston : This is my first solo institutional show on the West Coast. My work has been shown all around the world in galleries and museums. I’ve taken part in both solo and group shows but I’ve never had a solo show in my home state of California.

The exhibition itself includes eighteen high-resolution photographic works, portraits of the volunteer actors in a local art tableau vivant entertainment called Pageant of the Masters. The images are printed on a monumental scale.

The aim is to create a visual conversation between painting and photography. Not by using any photographic trickery, no false brush strokes added in post. Instead, I’ve chosen to photograph subjects who themselves are painted (as are their costumes). The high-resolution, grand-scale format, printed in archival pigments on rag paper, furthers this painterly quality. There are portraits, diptychs, and elaborate groupings, sometimes juxtaposed against images of the makeup templates created by the Pageant staff – that is, makeup painted on to Styrofoam heads. These are fascinating objects in and of themselves.

The museum has also produced a somewhat unusual exhibition catalog. It’s a collaboration between myself and the exhibition curator, Dr. Malcom Warner, the museum’s recently retired executive director. I say “unusual” because the catalog is designed in a concertina format, folded rather than bound, and it’s offered in two versions, a beautifully produced standard edition as well as a deluxe limited and numbered collector’s edition, featuring a signed print enclosed in a folio.

PL : What is Pageant of the Masters? Why did you choose to base your series on that event?

Matthew Rolston : Pageant of the Masters is known for its live presentations of art masterpieces. It has taken place every summer night for over eighty years in a beautiful outdoor amphitheater in Laguna Canyon, not far from the town’s main beach. The Pageant is an elaborate tableau vivant entertainment in which volunteer actors are painted and costumed, placed on artfully crafted and lighted sets, and reenact pivotal historical figures and works from art history, from antiquity through twentieth century modernism.

I was searching for a way to use portraiture as both a commentary and examination of a very simple human question: why do we make art? There is no one answer to this question. My hope is that the viewers will engage with my images and ask themselves that question, thereby beginning an interior dialogue into this somewhat mysterious subject.

PL : What was your process? How did you go about it?

Matthew Rolston: I attended the Pageant many times as a child with my family. It was a formative experience of my youth and in some ways led to my identifying as an artist. I’ve always been fascinated with the Pageant – the stagecraft, the illusion, and of course its subject, art.

I returned to the Pageant as an adult at exactly the moment when I was searching for a “way in” to a visual discourse about artmaking. Upon that visit I immediately knew I had found the perfect subject. It took a while to gain the trust of the Festival of Arts of Laguna Beach, which is the producer of Pageant of the Masters, but ultimately, through the courtesy of the Festival’s board and the project being championed by the Pageant’s longtime director, Diane Challis Davy, I was able to gain rarely granted access to the performers and spent several weeks photographing them in a makeshift studio set up backstage during the run of the show.

PL : You’re known for celebrity portraiture and glamour, is there a connection here?

Matthew Rolston: People know my celebrity portraiture as a celebration of glamour, and it often references the ‘old Hollywood’ values of impossible perfection. As I’ve grown older, I’ve begun to realize that the pursuit of impossible perfection is a denial of aging and death. I also began to realize that the gorgeous and the grotesque are deeply intertwined. They are really two sides of the same coin. This has become a fascination. There is tremendous poetry to be found in imperfection. I sense a kind of bravery in human beings as they attempt to deny their own humanity and take on the guise of ‘gods’ in a futile search for perfection.

With this series I’ve tried to show the humanity behind the theatrics of subjects masked in layers of caked-on makeup, body paint, and metallic powder. Far from glamourous Hollywood stars, my portrait subjects for Art People stem from all walks of life and social backgrounds. I sensed something both tragic and noble in the act of ordinary people choosing to impersonate famous artworks.

Ultimately, both the glamorous and the ordinary, the gorgeous and the grotesque, are united as expressions of the glory and scourge of humanity…our fertile imagination.

PL : What are art people? Why did you choose this title?

Matthew Rolston: “Art people” is a moniker often applied to members of the contemporary art world, a loosely organized international community – a glamorous and global crowd— of art fair-attending collectors, artists, curators and of course, the all-important gallerists.

Art People: The Pageant Portraits is something very different. These Art People are not those art people, so perhaps there’s an element of irony in my choice of title. This project is a record, through photographic portraiture, of the volunteers who allowed themselves to be painted and costumed as living works of art in the Pageant’s 2016 production, all in service of a simple existential question: why do humans make art?