Camera : from Memory and Passion to VEDERE (il) BAROCCO 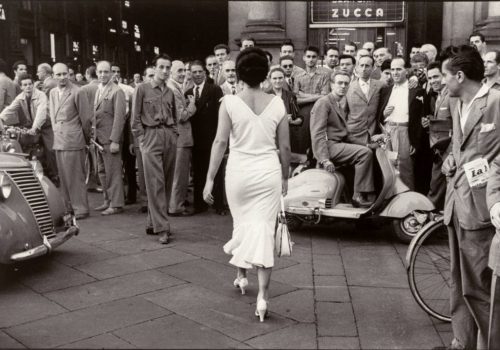 The Bertero Collection is one of the most interesting ones in Italy and some of its most peculiar images are on stage at CAMERA – Centro Italiano per la Fotografia (Turin), with Memoria e passione. Masterpieces from the Bertero Collection (over 200 photos by around 50 photographers picked out by the curators). Meanwhile, Camera also presents VEDERE (il) BAROCCO: lavori in corso: the exhibition tells of how a sizeable group of photographers ‘viewed’ the Baroque in 20th-century Turin. A double exhibition proposal, then, at the via delle Rosine venue.

Memoria e Passione shows works from the more than 2,000 images that form the Bertero collection, according to three sections and themes: the American Photography of the ’30s, Italy interpreted by the most well-known foreign photographers and the Italian photography of the ’70s/80s. On show, there are some masterpieces of the international photography, such as La strada per Palermo (1943), by Robert Capa; An American Girl in Italy, Florence (1951) by Ruth Orkin, and the reportage on Italy by Henri Cartier-Bresson (1952) as well as works that left a lasting mark on the evolution of Italian photography such as Gli italiani si voltano (1954) by Mario De Biasi or the iconic seminarians playing in the snow (1961) by Mario Giacomelli. Other masterpieces are signed by Bruno Barbey, Gabriele Basilico, Gianni Berengo Gardin, Lisetta Carmi, Mario Cattaneo, Carla Cerati, Mario Cresci, Mario De Biasi, Mario Dondero, Alfred Eisenstaedt, Luigi Ghirri, , Jan Groover, Mimmo Jodice, William Klein, Herbert List, Duane Michals, Ugo Mulas, Federico Patellani, Ferdinando Scianna, Franco Vimercati and Michele Zaza.

According to Bertero, who intended the value of photography as a twofold value (as a historical record and evidence of a certain historical event), the exhibition recounts of Italian history, crossed to everyday stories, as well as the evolution of Italian and international photography over the period 1930-1980. Most the collection consists of images from the Neorealist period, but Bertero’s choice includes tales from the following decades, progressively moving from documentary to conceptual. Indeed the show also features, for instance, the Verifiche (1969–72) by Ugo Mulas, who was investigating the photographic language; the journey Luigi Ghirri carried out in 1973 across states, deserts and galaxies while browsing through the pages of an atlas; the ancient Mediterranean culture reinterpreted through the images by Mimmo Jodice.

The exhibition is also the story of a collector, Guido Bertero, who since the end of the 1990s has been collecting around 2,000 prints. His collection began almost by chance in Turin, during a visit to the Artissima art fair in 1998, where the then collector of ancient and contemporary art came across two photographs by Jan Groover, which he decided to purchase for his daughters. Within a few months, the contacts with this language multiplied, especially focusing on Italian Neorealism. Today his collection is a point of reference for the study of Italian post-war photography. Curated by Walter Guadagnini, director of CAMERA, with the collaboration of Barbara Bergaglio and Monica Poggi, the exhibition is accompanied by a volume published by Umberto Allemandi Editore.

The second show, VEDERE (il) BAROCCO: lavori in corso,  projected on the occasion of the exhibition Sfida al Barocco at the Reggia di Venaria, is curated by Barbara Bergaglio and Pierangelo Cavanna. It focuses on the different ways of portraying Baroque architecture in photographic terms: a way of looking which has changed over the years, from the descriptive intention for documentary purposes to the elaboration of refined interpretational instruments, shifting from ‘Baroque photography’ to ‘Baroque seeing’.

“Photographs that are only apparently bizarre, momentarily unrecognisable (…), that draw on that Baroque multiplication of vanishing points, of views and the ensuing projective deformations to capture and transmit the excitement induced in the eye of the beholder. In other words, to testify to an experience”, the curators say.

The comparison with the spaces and volumes of the architecture of Guarini and Juvarra encouraged the photographers (Gianni Berengo Gardin, Giancarlo Dall’Armi, Pino Dell’Aquila, Giorgio Jano, Mimmo Jodice, Aldo Moisio, Ernani Orcorte, Augusto Pedrini, Daniele Regis and Roberto Schezen among them) to redefine the very idea of architectural photography, shifting from a descriptive role to an explicitly interpretative and critical one, as if Baroque was connotating the ways it is rendered.

Memory and Passion. From Capa to Ghirri.

Masterpieces from the Bertero Collection