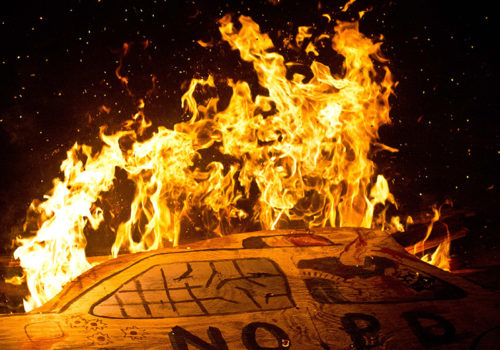 Beau Patrick Coulon spent his teenage years as a juvenile delinquent, living on the streets of Southern California, hitchhiking across the country, and hanging out with punks and anarchists. In his 20s he worked just about every odd job around from farming, flipping burgers, framing houses, and pouring concrete. Since then Coulon has taken up photography and filmmaking, carrying his 35mm everywhere he goes.

Beau Patrick Coulon is a New Orleans based documentary photographer and filmmaker whose imagery is informed by class struggle and subcultural movements. Born in Hollywood under the shadow of the 101 Freeway, he is the eighth of ten siblings and he spent much of his childhood bouncing back and forth between divorced parents in California, Florida, and Oklahoma. At 13 he moved out of his mom’s apartment to live on the streets with punks he met on Hollywood Blvd while skipping school.

As an unhoused juvenile, Coulon traveled by freight train across the country along a network of derelict squats, punk houses, collectives, and DIY art spaces. Sometimes he’d return to Oklahoma for a season to flip burgers in his dad’s cafe, or Oakland to spend time with one of his brothers. He first arrived in New Orleans in the mid-90s and eventually found work in the service industry and painting houses. Coulon also worked seasonally pouring concrete in Montana, as a farmhand in Washington, harvesting sugar beets in Minnesota, bookbinding in SF, as a line cook in Cincinnati, bar-backing in Portland, doing demolition in NYC, and framing art in Tampa Bay. Through these experiences, he developed a perspective informed by decades of working-class struggle and nomadic living.

Although he no longer lives on the road or sleeps rough, his past imbues his visual storytelling. Coulon’s imagery is that of one whose love for his subject matter overwhelms the frame. His work speaks the language of the street and transient Americana, documenting the uncommon in a way that is both sentimental and timeless. In a cultural landscape weighted towards marketed notions of refinement, class, and commerce, Coulon’s photographs explore everyday splendor and profound moments that often go unnoticed.

Coulon has shown his work in numerous galleries and art spaces around the United States, often appearing in group exhibits and benefit shows. He has had two solo shows, Marginal Transience, which opened at ABCO Art Space in Oakland and Nomad gallery in Los Angeles in 2014, and Terminal Impermanence, which opened in L.A. at Makers Mess Studio in 2016. In 2019 he curated Nowhere Near, a group photo show which was presented in a refurbished boxcar at the Black Butte Center for Railroad Culture. Beau has also taken his passion for visual art and narrative into the field of filmmaking, having worked on over 50 productions ranging from music videos, documentaries, feature films, and TV series. He has worked as a producer, director, cinematographer, camera operator, and in a variety of art department roles. When he’s not collaborating with a film crew, he is busy with personal work, experimenting with a range of analog film media to explore themes of social unrest, liberation, adventure, and rebellious humor.