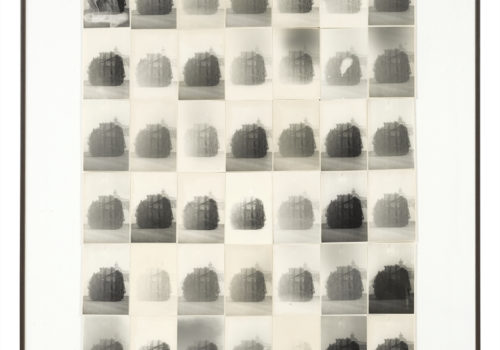 A very dear friend one day told me she wanted me to meet one of her friends.. And as often with this kind of meeting, something remarkable happened.

What followed was the first visit of  Bruno  to the gallery, carrying a little box, a casket made of wood filled with little photos, precious, some slightly damaged, others with their twins or triplets.

This work charmed me for different reasons. The very small size was relevant. Its  purpose could not be given  from the start. In Bruno there is a great sensitivity, his taste for fun is also very important, for me, both in his approach to the image as much as in the process of the technique he uses.

A man of letters, Bruno loves stories. And while he is very much up-to-date with the history of photography and with contemporary photography, he worked in silence for years, at the threshold of what he really wanted to do: telling his stories within a framework of unique pieces. Our meeting and our many discussions and talks finally made him cross that threshold.

Since then, he moves in this pleasure palace, rolls into this office/darkroom where infinite possibilities invite him to probe and define as he wishes these images collected both on his stay-at-home days or on his travels.

Bruno is an image detector. But he’s also a thinker, a questioner. What duplication, what hierarchy? Which original and in the end: which image? The image or the idea of an image? A memory or a trace? A fixed time or just a memory carried by a draught, dislodged by his handling of the prints. A negative made to follow a flood of variations in the head of its author, but also, become photos, in the head of the ‘viewers’, by their own associations, their own strolling through their thoughts and remembered visions.

Separately from the technique, full of poetry but also precision, there is in Bruno V. Roels’ work a deep discourse that assures me of the rightness of his approach, of the relevance of this work in progress, in constant metamorphosis.

I attach great importance to regular discussions with my artists and Bruno being from Ghent, we see each other regularly.

These conversations are essential as much for the artist as for the gallery owner. Since our first meetings, we very quickly decided to show his work at UNSEEN, which was a dazzling success, followed by  Paris Photo: a sell-out. The same for AIPAD as well as his personal exhibition at the gallery. His works have been bought by museums and large collections, both public and private. At this point there is a constant waiting list for his latest work. Many other galleries have tried to attract him since, several publishing houses are jostling with each other to publish his first book.

But Bruno, who has a full-time job, doesn’t let himself be disconcerted, takes his time and works meticulously. Nothing can distract him. Time is on his side and in his work.