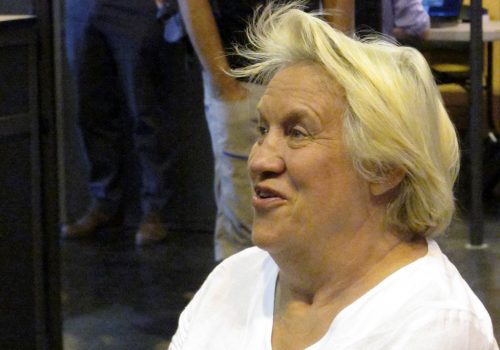 Brigitte Huard, director of phototography for Figaro Magazine and Ça m’intéresse, a personality from the world of photojournalism, died on Monday March 25, 2020.

She had flirted with death in 2009 in Perpignan, the first day of the Visa pour l’image photojournalism festival. “I found her all bloodied” recalls Jean-François Leroy. “I was so shocked that it was the only time I did not present the evening at Campo Santo. Miraculous survivor of a terrible heart attack and a coma, Brigitte Huard regained – as best she could – her energy and her good mood.

She was a regular in Perpignan where she sat on juries, notably that of the Canon Prix de la femme photojournaliste. An idea she had in 1998 or 1999 with Lizzie Sadin. Both were members of the Association of Women Journalists (AFJ), of which Isabelle Fougère was the president. “I remember we presented the project at the Palais des Congrès in 2000. A third of the audience had yelled at the idea, a third had approved. Remembers Isabelle Fougère. In 2008, invited by Floris de Bonneville, Brigitte Huard participated in the creation of the first world photojournalism festival in China, the Tops de Shenyang.

But the main part of her career can be summed up with two titles, Figaro Magazine, where she arrived shortly after its creation in 1978, and stayed there until 1984 before moving on to  Ça m’intéresse, the scientific magazine of the German group Prisma Presse. It is for these two magazines that she gave work to many photographers at a time when the editors had money. Many remember it, often with melancholy, sometimes with mixed feelings. In the world of photojournalism, characters are often abrupt. (Read the tribute of Jean-Pierre Laffont)

When I ran La Compagnie des Reporters, in the early 1980s, I remember having her sign a voucher of 40,000 Francs (€ 15,000) for a B&W photograph of Russian tanks in the suburbs of Warsaw by Pierre Perrin. She had influenced Louis Pauwels on the theme “the Russians will intervene this week”! Michel Sola of Paris Match, who had not wanted to put so much money on the table, had sent Henri Bureau the next day to redo the photo. All shots were fair game at that time. Brigitte had not appreciated “ la grimpette” (” competition raising the prices”): “Never do that to me again!” She said furiously.

Years had passed, Brigitte was retired, and we always found ourselves with pleasure in Perpignan on the stand of Polaris Images where Sylvie and Jean-Pierre Pappis welcomed us, and reunited us.

Next September, for the next curious Visa pour l’Image, Brigitte will no longer be there!

[1] Grimpette (Climbing), jargon of photojournalism, term coined by Michel Sola according to Alain Dupuis, Sygma salesperson, to designate the action of raising the prices between two magazines for a reportage – Interview with Alain Dupuis in 2011.