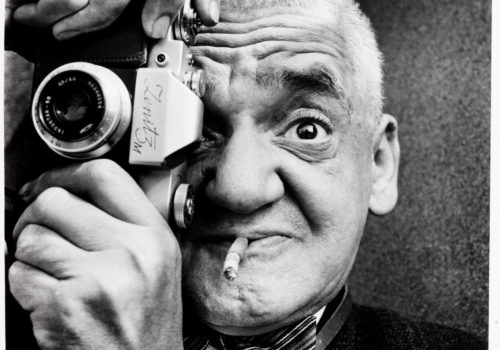 The Lives of Great Photographers, a free to enter exhibition at the National Media Museum in Bradford, draws on the Museum’s renowned collection to focus on the pioneers behind the camera, exploring the extraordinary stories surrounding some of photography’s most important innovators and artists.

Featuring Henri Cartier-Bresson, Julia Margaret Cameron, Robert Capa, William Henry Fox Talbot, Weegee, Tony Ray-Jones, Fay Godwin and Eadweard Muybridge, the exhibition will display iconic images and artefacts from these and other great names, selected exclusively from the National Collection of Photography.
Exhibition curator Brian Liddy said: “Photography has been with us for more than 170 years, and in that time countless famous photographs have been taken by many famous photographers. Often we may think we know these men and women because we know their work so well, but over time so many photographers’ personal stories have become overshadowed by their most famous pictures.  This major exhibition aims to redress the balance.”
The show begins with an investigation into the rivalry between two of the medium’s earliest pioneers. Without Louis Jacques Mandé Daguerre and William Henry Fox Talbot, photography as it known today would not exist. Daguerre, a former theatrical designer, presented the photographic process to France and the world in 1839. Working in parallel and in competition, Talbot, who became an MP for Chippenham, went on to create the first negative from which multiple copy photographs could be produced.
As technology evolved, the breadth and range of photography increased, and the methods by which it could provide a source of income, or artistic expression, became more diverse. Julia Margaret Cameron, although primarily considered an artist, copyrighted her work and attempted to make a living by selling copies. Her personal connections gave her the opportunity to produce some of the first celebrity photographs in existence. Olive Edis employed photography as a serving war artist during the First World War and Edward Steichen’s career was remarkable for its variety as he moved effortlessly from art, to fashion, to advertising.
Photography also proved an ideal medium when it came to documenting world events. Lewis Hine and Dorothea Lange were both driven by their social consciences to record the Great Depression in America. Photojournalism, the cousin of documentary photography, is represented in the exhibition by names such as Henri Cartier-Bresson and Robert Capa, founding members of the world’s first photographic agency, Magnum. Both served in the Second World War and produced images that helped define an era.
One of the most notorious life stories is that of the English photographer Eadweard Muybridge. His pioneering work in chronophotography, whereby movement is captured by a sequence of photographic exposures, famously demonstrated that all four legs of a horse left the ground as it galloped. Until then the motion of a horse’s hooves were too quick for the human eye to determine. Perhaps less well known is the fact that Muybridge murdered his wife’s lover in cold blood but was later acquitted with a verdict of ‘justifiable homicide’.
The exhibition also includes Roger Fenton, Lady Clementina Hawarden, Alfred Stieglitz, André Kertész, and Larry Burrows. Each photographer is represented by their photographic portrait and a selection of their images. None is living, as only those whose lives and work can be evaluated in their entirety have been selected.
Brian Liddy added: “This exhibition shows just how rich the museum’s collections are.  The work of some of the best-known photographers in history will be shown alongside the kinds of cameras they would have had to carry and use in the course of their work.  We’ve also taken the opportunity to show rarely seen material, such as pages from the notebooks of Tony Ray-Jones detailing what was going through his mind when he was thinking about how to get the pictures he wanted.
“By recounting the lives of these great photographers, we hope to provide an insight into what led them to produce some of the greatest photographs ever taken.”

The Lives of Great Photographers