BnF : Faces of exploration in the 19th century. From myth to history 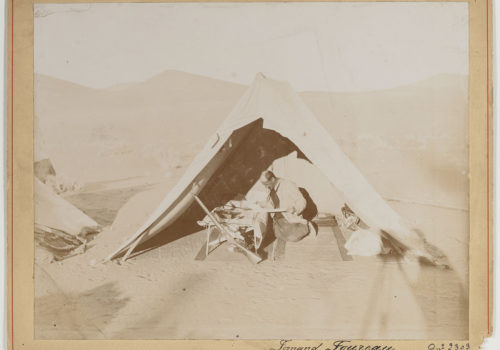 The Bibliothèque nationale de France celebrates the bicentenary of the Geographical Society, whose archives it preserves, by devoting an exhibition to exploration in the 19th century. Relying on the exceptional collection of the Geographical Society and on significant external loans (Quai Branly Museum, National Museum of Natural History, Army Museum, Guimet Museum, etc.), the exhibition brings together notebooks of diaries and sketches, maps and photographs, measuring instruments, objects and specimens collected in the field…nearly 200 items that provide a new perspective on scholarly curiosity and the “discoveries” of the time . The route offered to visitors particularly highlights all the figures – female explorers, guides, interpreters, etc. – who were the invisible actors and actresses of the official narrative and iconography of European exploration.

THE EXPLORER, THIS HERO…

Exploration was, for the Europeans of the 19th century, a horizon of expectation with multiple challenges: to advance geographical knowledge, nourish knowledge such as anthropology or archeology, but also to evaluate the exploitable riches, at the time of the expansion of colonial empires. In the history of the encounter of Europeans with the rest of the world, the figure of the explorer is at the center of a heroic narrative, circulated by adventure literature, popular imagery and, later, cinema. At that time, the mythology of exploration was built based on several received ideas: the figure of the explorer, solitary traveler, sole collector and creator of knowledge, the fantasy of explored territories devoid of any history and any inhabitant, the dream of an integral, objective and disinterested knowledge of all geographical “elsewhere”.

The Faces of Exploration in the 19th Century exhibition. From myth to history confronts this mythology with the reality on the ground. It is an opportunity to show paths too long passed over in silence, those of women explorers, non-European explorers, intermediaries, guides, interpreters who played a crucial role in the exploratory movement, even if they have been forgotten from the grand narrative. By proposing a material history of travel, embodied on the ground by a multiplicity of actors and actresses, this exhibition also brings out another story, that of the different forms of appropriation of the world during the colonial era. It testifies to the intertwining of scientific exploration practices and territorial conquest operations, which, without being systematic, was a reality.

A JOURNEY TUNED BY THE TIMES OF EXPLORATION

The scenography of the exhibition is organized around the three stages of exploration: the scholarly preparation of the trip, the practices in the field and then the storytelling and images on the traveller’s return. Travel diaries, maps, photographs and objects collected or looted make it possible to account for the daily realities of exploration, beyond the fascination exerted by the attraction of the elsewhere, in the 19th century as today.

For each stage, the contributions of non-European exploration players are highlighted: Egyptian or Siamese sovereigns sponsoring explorations, African travelers traveling across the continent, guides, interpreters, porters constituting the intermediaries essential to the realization of the collective enterprise, of how exploration actually was.

The visitor will thus meet, alongside the well-known figures of Brazza, Gallieni, Dumont d’Urville or Charles de Foucauld, Gabrielle Vassal and Octavie Coudreau, Joseph Martin and his Tunguse guide, the Fulani explorer El-Fellati, the scholar Nain Singh, the former slave Apatou accompanying Jules Crevaux in the Amazon, and many others.

Scenographic reconstructions will allow, through an immersive approach, to rediscover the daily life of explorators to  imagine a Parisian geographer in his study, to find oneself in the heart of an explorer’s camp in the middle of the Sahara, to rediscover the atmosphere of an ethnographic exhibition of Siberian objects, or even attend a lecture-projection as a member of the Geographical Society.