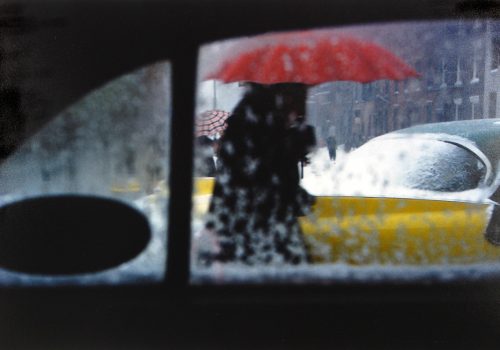 The viewing room exhibition at Howard Greenberg Gallery brings together a selection of Saul Leiter‘s iconic color street photography, where reflections and abstractions so often reign supreme, with his rarely seen paintings and collages, work that he produced alongside his photography for the entirety of his life. Together, they illustrate the depth of his visual experimentation and curiosity, neither of which could be satisfied by the limits of a single medium.

On the occasion of the current exhibition of Saul Leiter’s work, Howard Greenberg reflected on his friendship with Saul, and the qualities of his photography that were most memorable and distinctive.

Q: What was the experience like of going through the first boxes of Saul’s work, in black and white, and then in color?

HG: When we first met, in his apartment, he had prepared a few boxes to show me. We sat in his “living room” which was also his painting studio, storage facility, resting place and more. If you’ve ever seen the documentary, In No Great Hurry, you saw what I saw. I should say that I was only expecting to see black and white work. This is what the New York School was about and I really had no knowledge of his career in fashion which was primarily done in color. And black and white I did see. The boxes were old and dusty. When I opened them, I experienced what Eikoh Hosoe used to talk to me about – the aura of the prints. They glowed and were, to my eye, the embodiment of what I loved about vintage work from the 50’s, with the wonderful papers available then. Of course there were the images, pure Saul, and as I came to understand, could only be so. It didn’t take me long to ask him if I could show his work. He tested me in his way, and in no great hurry, said yes.

About two or three years after our first show, which was successful, he came into the gallery to show me some of his color work. One box, about 25 recently printed 11×14’s of older work. They were quite good – Saul’s sensibility was very much there. However, I wasn’t sure of the color palette and at first I had the feeling that his slides may have faded. So, foolishly, I asked him. He looked at me and quickly said “Howard, I don’t think these are for you,” and then promptly got up and started to walk out. Carrie Springer, who worked for me then, and was the point person for Saul, looked at me with terror in her eyes. So I rushed to Saul before he could get out the door, semi-apologized, and asked him if I could have the photos for a few days and look at them without rushing. He agreed, and the next year we had the first Saul Leiter “In Color” show.

Q: How was Saul’s work, in terms of both prints and imagery, distinct from the broader New York School?

HG: Well, by now his work is well known, and I believe the success comes from the poetic and painterly quality of the color, and regardless of the cars or fashion in his images, the sense of being lost in time. It doesn’t really matter whether you are looking at color or black and white. Saul’s sensibility transcends his medium, and this includes painting. He is a great artist, immediately recognizable, original, and so true to himself.

I’m not saying that any of the other so-called New York School photographers are lesser. They all have their own sensibilities within the genre, and each in his or her own way is a great photo-artist. But Saul is different, partially because of being a painter and having a distinctive ability with color photography, and partially because of his unique brand of artistry.

Q: From the time you spent with Saul, both professionally and personally, what has stuck with you the most?

HG: Much has stayed with me about Saul. I dare say I never felt as emotionally close to any other photographer. Saul became part of the gallery family. He attended our party’s, spent hours and hours of time in the gallery kitchen, “kibitzing” with staff and visitors, and enjoying all of it. Personally, although he could also be an impetuous artist, I thought of him as an uncle, or a close cousin, one to whom I was terminally committed. I often think of his voice, the way he spoke. I think about his little pearls of wisdom, “Saulism’s” as Margit (Erb, now director of the Saul Leiter Foundation) and I liked to called them. His giggle was infectious. Perhaps I was in love with him? Why not, everyone else was. Yes, I guess you can say Saul and his photographs are one and the same; you don’t like them, you love them.