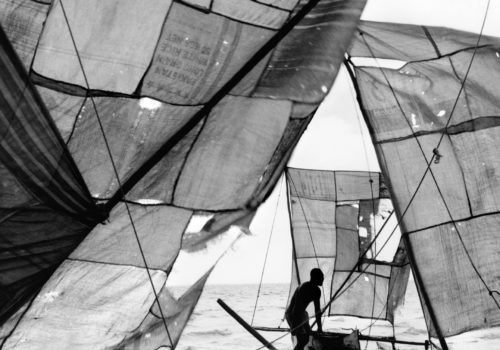 I photographed rural Africa, where the people have their feet on the ground. Bernard Descamps was always horrified by constraints and obligations, even at school, he did only what he wanted, but was a “brilliant student when he wanted to be,” according to his professors. “I was a chatterbox, even if then I appreciated silence” he says today, relaxed, gladly talkative, straightforward. Set for a comfortable future, this biologist fell into the photography bath and felt so happy in it, that he eventually would abandon his research. In 1978, he is a professional, three years after having exhibited at the Bibliothèque Nationale thanks to Jean-Claude Lemagny – who foresaw a real change in this French new wave, rich in promising names: Eddie Kuligowski, Bernard Plossu, Bruno Réquillart.

In the Fall of 1985, another important step, his entry into the agency VU; just prior, this man was simply besotted with discovering the Sahara, oasis of pure lights and mineral shadows, the theme of his first book accompanied by poems from Tahar Ben Jelloun. Since then, from Algeria to Ethiopia, Mali to Madagascar, this reporter slowly went up and down a part of the African continent that he imagined, as a child, like a united kingdom in a joyful mood: black magic!

In Africa, he found ancestral values, as well as a respect for the earth, more precious in his eyes then any diamond. There is also the first African Photography Encounters organized in 1994 with Françoise Huguier, where Malick Sidibé, Samuel Fosso, Seydou Keïta, Pierrot Men and these ambassadors of the black memory that are written in the future of this Ebony Earth, as named by the great reporter Albert Londres.

No boundaries, chance encounters, graphic contemplation, the photographs of Bernard Descamps reflect his state of mind as a celestial traveler; and his taste for shadows shared with André Kertész. He leans towards minimalism. And a certain eurhythmy that is not free nor subtly played, but that reminds us how much he has a gift for wonder. This is why he continues on his path, the horizon in front of him, in search of the unexpected.
Brigitte Ollier