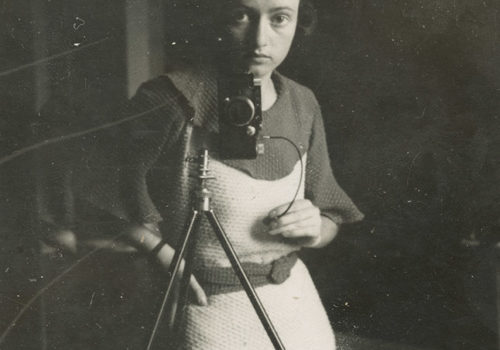 History is filled with stories of long-lost suitcases of photographs turning up and becoming exhibitions, from Robert Capa to Vivian Maier. These highly intimate archives serve as powerful documents of our time. In late 2012, a suitcase belonging to Lore Krüger (1914-2009) was presented to Felix Hofmann, a curator at the C/O Berlin. The photographs shot by this German photographer between 1934 and 1944 are now being exhibited at the C/O Berlin along with a catalogue co-published by Braus.

Lore Krüger started taking pictures as a child before turning her full attention to it at age nineteen. She spent a year in London as an au pair but was not allowed to enroll in photography classes, returning instead to her Jewish family, which had left Germany for Spain when the National Socialists rose to power. Krüger embarked on an odyssey that took her from Spain to France and on to the United States after two stays in prison camps. She held on to her camera and kept taking pictures throughout her exile and returned to Germany in 1946 with a collection of 250 photographs. Settled in East Berlin, she began working as a translator of English-language literature for the publishing house Aufbau Verlag (to which the publisher Braus now belongs).

Krüger learned her technique from the German photographer Zerkowitz in Barcelona before starting work with Florence Henri in 1935 in Paris. Henri had studied with László Moholy-Nagy at the Bauhaus in Dessau in the late ‘20s, and Krüger’s work can be seen as a continuation of the Bauhaus aesthetic. She experimented with light for her still lifes and shot multiple photomontages. Unlike Henri, however, she felt the need to get out of the photo studio and use her Leica or Rolleiflex to document society, including a documentary of the annual pilgrimage of Roma families to Saintes-Maries-de-la-Mer in 1936.

Some highlights of the exhibition are Krüger’s vintage prints which the artist herself carefully placed onto sheets of paper, centered and offset, signed Loré and captioned in pencil. Unfortunately, the various subjects and styles—street scenes, portraits, still lifes, photograms, documentary work—struggle to form a coherent whole. But the photographs are a reflection of exile, and a life in exile defies coherence.