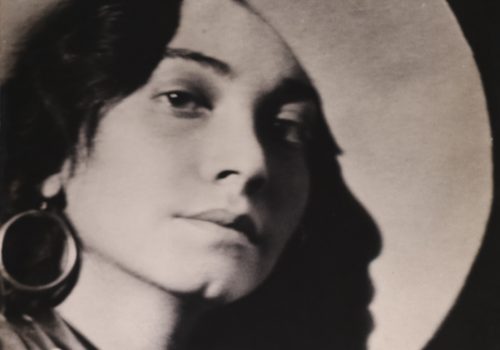 The Wiener Holocaust Library announces the online exhibition Berlin/London: The Lost Photographs of Gerty Simon is now live and available to users to view at home. This exhibition explores the life and work of pioneering German-Jewish photographer, Gerty Simon, who was renowned in the 1920s and 1930s for her portraits of important political and artistic figures in Weimar Berlin and interwar London.

Besides the incredible photography that Gerty produced she also lived an incredible life – escaping from the Nazis in 1933 and having to uproot her entire life from Berlin and flee to Britain. The Wiener Holocaust Library hope that with this project we can bring into focus, for the first time in eighty years, the work of this powerful, innovative and largely forgotten photographic artist, particularly as she photographed so many important cultural figures from the lost world of Weimar Berlin.

On the Gerty Simon collection – her life & work:

In 2016, we received a donation of documents and photographs from the estate of Bernard Simon. Amongst his personal effects were 327 large-scale prints of photographs taken by his mother, Gerty Simon. The collection also has material on exhibitions of Simon’s work held in Berlin and London and newspaper reviews – it became immediately apparent to us that Simon had once been a prominent and successful photographer, although she has barely been remembered. The context within which Simon had produced her work was also immediately interesting. She worked first in Weimar-era Berlin, where it seemed likely from the identity of her subjects that she had connections with the thriving and innovative creative scene of actors, writers, composers, dancers and artists there, as well as with the world of politics. What is most arresting and moving about her photographs is that they contain some of the personalities from the milieu in Berlin that was largely destroyed by the economic and political difficulties of the early 1930s and the Nazi accession to power in 1933 – a number of her subjects were later persecuted by the Nazis, with some becoming refugees themselves. Simon came with her son to Britain in 1933 to escape Nazi persecution yet it is clear from the identity of her sitter’s taken in London between 1934-1936, that she was very rapidly able to establish a footing in influential circles.

The quality of the photographs, the significance of Simon’s sitters, as well as her story of displacement from Germany and re-establishment in Britain meant that, for us at The Wiener Library, this was a particularly compelling collection and we decided it was imperative to stage an exhibition (and produce an accompanying catalogue) focusing on the life and work of Gerty Simon. The aim of which has been to bring this forgotten artist to public attention for the first time in over 80 years.

In response to COVID-19, note that The Wiener Holocaust Library is closed until further notice in line with government advice.