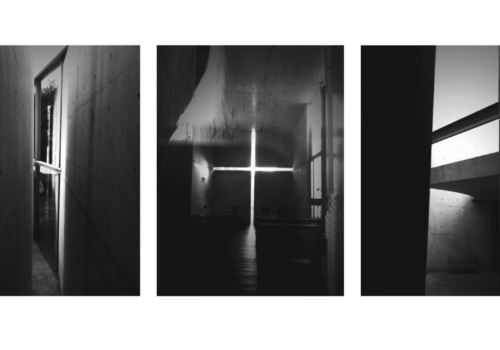 Philippe Séclier documented for nine years the architectural constructions both public and private of Tadao Ando in Japan and around the world. This book invites us to follow the photographer’s quest and brings together 2,300 B&W photographs from a selection of more than 120 buildings in the form of an atlas. Following a rigorous serial protocol, reading the plates makes it possible to structure the various geometric shapes of the Japanese architect but also their recurrences and to perceive the play of spatial echoes and resonances between each building.

The publication of Atlas Tadao Ando accompanies the opening of the Bourse de Commerce in Paris, the images of which constitute the culmination of this project.

Tadao Ando’s architectural work is recognized around the world and has been the subject of numerous works. In an unprecedented step, Philippe Séclier, passionate about architecture, undertook to photograph a large part of his buildings. This project is in the vein of his previous artistic explorations where he seizes a work to make us rediscover it when he follows in the footsteps of Pier Paolo Pasolini in The long sand road (Editions Xavier Barral, 2005 ) or when he directed his documentary film on The Americans by Robert Frank (Silex Films, 2009). This project on Tadao Ando is part of a longer period where the persistence of Philippe Séclier is akin to the resilience of post-Fukushima Japanese, to draw up a world map of the architect’s buildings including the most iconic but also the most confidential and difficult to access: houses, churches, temples, museums, foundations, universities, libraries, multi-cultural complexes, theaters, shops, shopping malls, hotels, restaurants, community centers, teahouses, metro or train stations…

Following a rigorous protocol, each building presents both overviews of their environment and geometric details. They are presented in the book in the form of a series of plates “like the pieces of a vast puzzle to be put together and re-contextualized”, underlines Yann Nussaume, professor of architecture and specialist of Tadao Ando, ​​in his introductory text.

Reading the plates of this atlas makes it possible to perceive, beyond the concrete and glass envelopes, the eminently contemplative character and the artistic force of the work of the famous architect. This dialogue with light and matter allowed the photographer to break down his creative gesture, thus offering an original way of approaching the architecture of Tadao Ando. As Yann Nussaume sums it up: “What Philippe Séclier seeks above all is to deploy in space, to translate its volumes, its intervals, its interstices, its spacings, its luminescence and its transparencies in order to create in turn emotions. ”

Philippe Séclier also makes us relive his peregrinations through the text, while an essay by Yann Nussaume sheds light on the different facets of this approach, which is both aesthetic and methodical. The book also features a comprehensive illustrated bibliography of the work of Tadao Ando.

Around 2,300 B&W photographs of a selection of more than 120 buildings