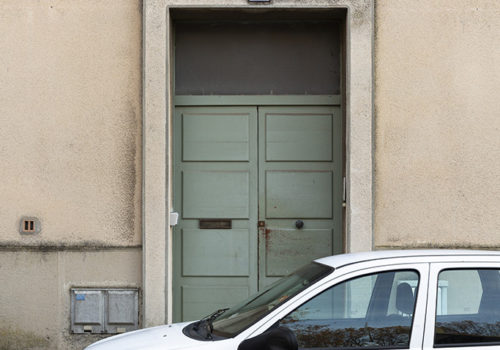 Here is my favorite. It is the photographic work of Grégoire d’Ablon that brought me a lot of emotion.

It is a collection “see you tomorrow” mixing texts and photos, a poetic vision of the end of life without means and a difficult experience for a young man confronted with the misery of people with whom he had forged daily links.

During this festival period, I also have a big thought for Peter Lindbergh, who I know is greatly missed by his loved ones and who I think will be sorely missed in photography.

Last May, I graduated from the National School of Photography in Arles.

We do not immediately make a living from its practice. So, for several months, I have been working for a bicycle service company. So I became both a bicycle taxi driver, a bicycle bus driver, a glass, cardboard and general garbage collector. But also, did food delivery for dependent people.

Every day, my colleagues and I give these people lunch and dinner. We slip them a bag, they open the door for us. The route repeats itself, habits and formalities take hold, then one day our boss tells us that we will no longer have to go to this address. And we resume our race.

At 2 rue Metras, do not press the doorbell hard. One press, just once, is enough. Three steps in the hall, immediately to the right, still the same hand. Only one hand, quick and determined, 8:13 am it’s not that late. A hand and hello, anyway. So hello and see you tomorrow.

In the Chiavary dead end, you have to bring up two paper bags, but are asked especially not to slam the door, it wakes up the pigeons. On the first floor, we leave a bag  on the handrail of the stairs. The neighbor takes care of it, she has the keys since he can’t hear us knocking. On the second floor, we knock before opening the door and we leave everything in this large white fridge constantly empty. Be careful, no mistake, this is the only “sugar free” on the tour. On the door, the same indication

“Close the door securely behind you and be careful that the cat doesn’t escape.”

We no longer go to 2 impasse Jean-Jacques Rousseau

3 rue de la Madeleine is often the same refrain. First six steps including one where the tag is not erased, we ring the bell and then

yes I am here I am coming.

Ah, there you go.

Thank you so much,

Have a nice day and see you tomorrow.

At 15 rue de la Madeleine, on the other hand, it’s a daily surprise. Many more steps to climb to find her either in front of the TV, which we could have guessed from outside, or in front of a crossword puzzle , too absorbed to look up but aware of our presence. We greet each other with a frank hello straight from the end of the stairs without even having met her gaze yet. A glance left in the living room before going straight to put away the two meals. Here the fridge is often full, cooked meals put back in the fridge as witnesses of the visits of the day before. We don’t come to 15 rue de la Madeleine on Saturdays, it’s market day.

And there you have it, as usual, all cool, without the bag. See you tomorrow.

I’m sorry but no, I still don’t have a cigarette at 10 rue Girard le Bleu. Sunflower oilcloth, milk chicory, toast and butter, hinged mosquito net door and towel around the neck.

I have never seen the owner of 11 rue Balechou. The protocol is simple, we tap twice on the shutters and open the one on the right to slide the basket in for both meals. Once closed we say to ourselves, see you tomorrow.

At 2 rue Favorin you need two pieces of bread. The one left in the bag, in the fridge, and the other must have been slipped here, in this bag, yes this one by the bed and then you can help me turn on channel 3 on the TV? And morning cartoons echo all over the street. It’s when this gigantic medieval castle-like house is silent that you have to worry. Several times we needed to help her up after she told us about her night spent on her kitchen floor. So, when the TV covers our voices, and all is well, we don’t blame her for not answering our see you tomorrow.

We always end up at the Genive dead end, with the two sisters. The youngest waits each morning crying on a step at the start of the dead end. As soon as she sees us coming at full speed on the bike, she bursts out laughing. The second often waits in front of the door to check that the baskets end up on the small buffet next to the microwave. The days of great laughter we can be entitled to a hand kiss from the younger of the two. The two sisters were interned in August. ”