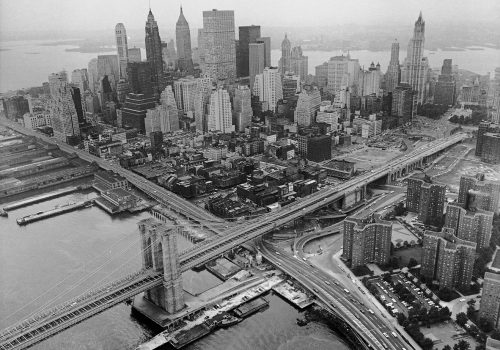 “By infiltrating networks of workers and outlaws—dissidents who were further marginalized in America owing to their class, race, and gender— Lyon sought to make those outsiders and their issues visible.”—Brian Wallis

Aperture, in partnership with Fundación ICO, announces the release of Danny Lyon’s The Destruction of Lower Manhattan, first published in 1969 and now republished in this facsimile edition.

Lyon’s visual essay is a singular, lasting document of the demolition of nearly sixty acres of downtown, mostly nineteenth-century New York architecture. Aperture’s reissue retains the power of the original, while bringing a chapter of New York history back to life at a time that the city begins to reimagine itself once more.

In 1966, after completing his series The Bikeriders, Lyon settled into a downtown loft, becoming one of the few artists to document the historic changes taking place in downtown Manhattan. Development plans included the construction of the World Trade Center, an access ramp to   the Brooklyn Bridge, expansion of Pace University, and growth of new businesses and housing. The photographs Lyon took represent a fierce, irreplaceable report of doomed facades and empty interiors. Intermingled within the architecture are portraits of individuals and the demolition workers who, despite their assigned task, emerge as the surviving heroes. Through his striking images and accompanying texts, Lyon paints a portrait that still appeals to our emotions.

Compiling panoramic images, architectural views, and humanistic portraits of demolition workers, Lyon’s series serves both as document of and a tribute to a transitional moment in the history of New York City. Fifty years later, Lyon’s work continues to resonate with moral power.

An exhibition of The Destruction of Lower Manhattan is on view at Museo ICO in Madrid, Spain, through January 17, 2021.

Danny Lyon (born in New York, 1942), regarded as one of the most influential documentary photographers, is also a filmmaker and writer. His many books include The Movement (1964), The Bikeriders (1968; reissued by Aperture, 2014), Conversations with the Dead (1971), Knave of Hearts (1999), Like a Thief’s Dream (2007), and Deep Sea Diver (2011). Lyon’s work is widely exhibited and collected, and has been awarded Guggenheim Fellowships twice and National Endowment for the Arts grants ten times. The retrospective exhibition Danny Lyon: Message to the Future (2016–17) toured in New York, San Francisco, and Berlin.

The Destruction of Lower Manhattan

Photographs and text by Danny Lyon

This facsimile of The Destruction of Lower Manhattan has been produced and published in partnership with Fundación ICO.