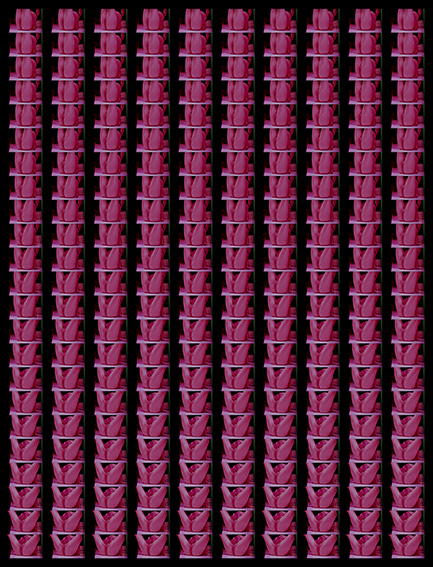 Atlas brings together Antoine d’Agata’s most recent work. The exhibition is conceived as an integral part of a cinematographic and artistic project begun in 2013 with the release of the film Atlas. An installation, White Noise, based on the film, is currently on view at Labanque as part of the exhibition Dépenses (curated by Léa Bismuth). This project has also given rise to an eponymous book publication, forthcoming from Éditions Textuel in October.

By contrast, Antoine d’Agata’s latest series, Paradigmes, featured at Galerie Les Filles du Calvaire, traces a new formal approach located at the boundary between photography and film. Atlas is, first of all, a journey, a record of the artist’s obsessions and sensory experiences. Traversing continents, Antoine d’Agata thus documents a harrowing, lurid story of prostitutes he encounters and places he visits. He distils these nights into “somber realities” and the “destructive satisfaction of desire.”

“At the heart of the chronologies and accumulations which make up Atlas and Paradigmes all certitudes collapse and reality unravels into fractured sequences of life,” says d’Agata. “I am drawn to the hidden, dark side of the world, to its ill-fated, taboo character. Under the premeditated influence of sexual disorders and drugs, I put myself at risk, physically and mentally. Addiction to chemical substances is the active ingredient of my capacity to continuously rewrite my own destiny, my gaze, and my gestures through photographic action.”

While experience does initially outweigh the concept in Antoine d’Agata’s work, formal expression is foregrounded in fragmented imagery and a deliberate splintering of the whole. Starting with chaos, Antoine d’Agata creates an ordered, sequential system. The existential anarchy of subjects and locations turns into a grid, a set of rows and columns whose seemingly simple form plays on the confusion of the senses and obsessive repetition.

By deploying a systematic flux of images, d’Agata suggests a new language—a strategy of assemblage which consists in fusing fragments of his own experience. The dynamism of the composition, which we feel as vividly as a lived moment, is formalized by the artist after the fact, image by image, in an expansive plenitude of experience. Pushing the motif toward abstraction, this extreme repetition is nevertheless a source of visual detachment. The process of acquisition of images that are judged acceptable, first requires that the artist temporarily relinquish control over the action: “I lose myself, and cannot but lose control, and even my mind, but this loss is intentional, because thanks to this fragility I had never been more in touch with what I would consider to be a valid artistic practice. The implementation of what could only be an ideological belief allows me to develop my own perspective. Chemistry runs its course, from blood through to the muscle and the brain; it steers gestures, emotions, thoughts; erases doubt and fear; enhances and quickens my awareness of the surroundings to the point of madness. I let myself be shattered by the waves of life; I persistently act based on the theoretical certitude that every gesture outlines a possible future, a sensation of becoming. Every situation imagined, provoked, or experienced is a blow against the temptation to yield to comfort, dealt in the impossible war I wage against myself, against the ineluctable exhaustion of my body.”

Against himself. In fact, Antoine d’Agata does not seek to show the world the way it is; instead, he offers us his own, the world he explores. The title chosen for this series (Paradigmes), integrated into the larger corpus of Atlas, registers the universes the artist traverses and reconstructs. These images are thus innovative attempts at representation in which the artist endeavors to set aside some of the rules and presumptions of photography (arrangement, composition…). It is in this sense that the project is paradigmatic. “In my most recent work, I have tried to forge a secret, illegal language, constructed by deconstructing aesthetics. My intention is to pervert and destroy the perspectives which pollute the norms of the photographic language.”