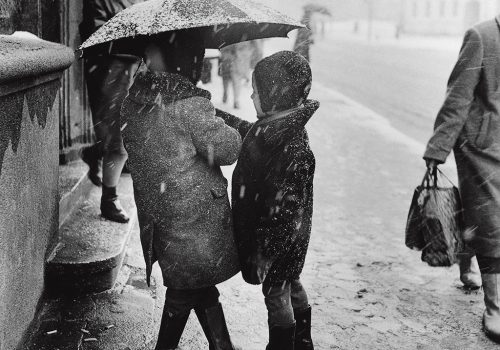 “To photograph people, you have to love them”. Antanas Sutkus

We all need love.

Today, more than ever, the photographic image is this tool with which we arm ourselves in search of love. We click, we like, we share, we use this word “love”, by distributing it, by splitting it without counting. With one goal: to be loved in return.

We want to be in control of the situation, but we are trapped in the absurdity of this crazy race for fast consumption. Frustrated, emptied, lost, we need a true, pure, disinterested source.

Antanas Sutkus (born in 1939) captured love as a man, humanist, photographer, patriot. His native country, his Lithuania and his people proud and resistant to the Soviet invasion, inspired him so much love, that every image breathes it, radiates it … Gives it.

At that time when all the images produced on the territory of the USSR were those of propaganda, direct or indirect, where the photographers self-censored, any honest visual speech was a feat, a courageous act.

And the more the image was photographically and humanly true and just, free of any political constraint, of ulterior motives, of submission to the pressure of power … The stronger the message of love.

The photos of Antanas Sutkus, not posed, not staged, are portraits of concrete people, acquaintances of the artist or strangers met in the street, but they are also above all timeless symbols. And often, in different countries, people recognize themselves as little children in the images (as in the famous “The hand of the mother” in 1964), so much Sutkus knew how to capture the most beautiful, simplest and deeper.

Born and raised in the countryside, Antanas Sutkus photographs the villages and their inhabitants with such tenderness, accuracy and poetry, that his characters seem familiar to us, like this aunt Agata who dashes on the lens, or this carefree boy on a bar, also the first photograph of the young Sutkus.

City life, where Sutkus moved for his university studies in 1959, is more fleeting, tense, dense, fast. The city can be photographed differently. The artist finds there his own geometric rhythm of landscapes seen from the sky, or people in a hurry, concerned, concentrated. Sutkus knows how to reveal their hidden, fundamental self. Photographed from the front, from the back, in the shade in the rain – Sutkus’s characters cannot hide from his intuitive eye, his gaze that captures the essential in humans.

Antanas Sutkus had 2 tools in his art: a camera and a heart whose beats mingle with ours, triggering a chain reaction: that of the selfless love that we seek so much …

ANTANAS SUTKUS: I LOVE YOU