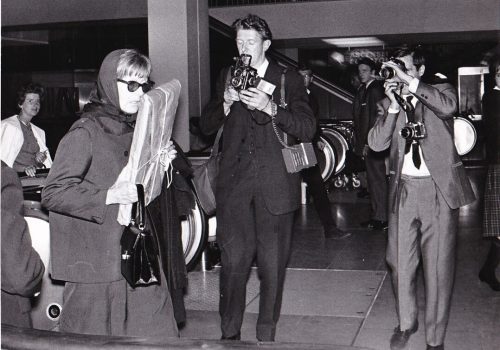 On April 2, 2020, at the age of 91, photographer André Sas died in Saint-Maur-des-Fossés (Val de Marne). In October 2019, Mohamed Lounès, of the Gamma agency, and Christian Ducasse, who knew him at the Association of Journalist Reporters Photographers, still found him sparkling.

But since the death of Lucette, his wife from Marseille, he had lived with difficulty in his apartment in the Marais. Finally, he ended up in a retirement home in the Val-de-Marne.

He was born on September 26, 1928 in Marseille. In the land of Cannebière he had been a baker before his uncle, photographer Louis Foucherand, brought him to the capital. He  became a photographer and friend of Raymond Depardon.

André Sas was one of those photographers seen in postwar photos, Rolleiflex in hand, flash ready to dazzle Juliette Gréco and Miles Davis in love, Jeanne Moreau, Callas or de Gaulle…

“André Sas snuck behind the scenes of the Olympia, he would shoot between two doors,” wrote Philippe Broussard recounting the 1958 Billie Holiday concert at the Olympia [1] .

“I really liked André Sas. “Said Hugues Vassal, his colleague at the time. “We saw each other all the time at the Olympia and I regretted that he did not join us at the start of Gamma”

In fact André Sas worked with Raymond Darolle at the Europress agency which had its heyday in the 1960s, then he was distributed by Gamma and by Sygma. He also collaborated with a small agency specializing in music, Méphisto, before entrusting Rapho with his archives which Raymond Grosset appreciated.

In 1975, he joined the editorial staff of Le Journal du Dimanche and took charge of the photo department until his retirement in 1996.

To speak of André Sas, photographer, is to immerse yourself in the France of the 1950s / 1960s. France rebuilding itself, which relishes rediscovered freedom. It’s a time when freelance photographers were scarce, competition was fierce because daily and weekly newspapers still had a lot of full-time paid photographers. You had to be better than colleagues from Paris Match or France-Soir, better than those from France Dimanche or L’Aurore…

They drove  Peugeot 203, or Frégate Renault, had just abandoned the Gaumont glass plate devices for the Rolleiflex. Phones were scarce and the artists did not have a press agent yet. And there was no camera, no microphone … Photographers could call on music stars or politicians, even the older ones, with a smile, a wave of the hand …