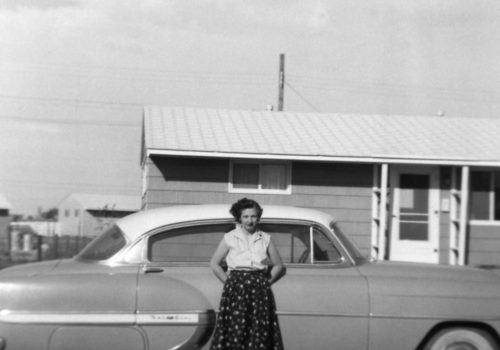 “America has been using cameras since Kodak launched its famous slogan ‘Press the button, we do the rest’ in 1888. In the 1950s, there were 150 million people living in the United States and half of all homes owned and regularly used a Kodak.
The photographs in American Dream were all taken outdoors and are mainly black and white, surrounded by a serrated white or cream border where the studio that developed the photos has sometimes placed the date, and couples such as Eileen and Gary have scrawled their names.”
Marie Cordié Lévy and Marc Mawet

Sylvie Meunier has been collecting everyday photographs like these for years. The amateur images, as poor and imperfect as they are, are a key element in her work. She takes inspiration from their ordinariness and their lack of context, using them as something like a blank sheet for her own narrative purposes. The assemblies, story-telling and installations she creates thus draw on the possibilities for projection, reflection and reconstruction, channelling emotions through her offerings. While the contemporary period demands the illusory validity of the apparent and the deceptive constancy of the blatant, Sylvie Meunier expresses a need for the minimum, for fragments, for loss and the passing of time.

Patrick Tourneboeuf is fascinated by images. This is evident in his own work as well as in his love for other people’s pictures. His photographic approach is resolutely artistic, systematically seeking to trace human presence in supposedly private places, tied to History, to the meticulous observation of the ordinary, of the slightest, almost imperceptible traces, worn away by time.

He takes a similar approach as he gathers photographic documents produced by others. He has a curious fascination for the unpremeditated traces captured by others in photographs that are often tied to memories. He amasses them today, after time has passed, for a better understanding of their reality caught suspended in a contemporary format.