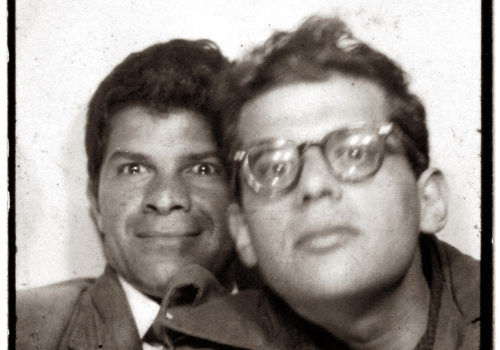 The exhibition gather vintage photo booth strips, “drugstore” prints, and uniquely captioned prints by Allen Ginsberg (1926-1997) was made between the late 40s and early 80s, traces his life from New York to San Francisco to Tangier and elsewhere. His pictures are candid photographs of legendry “Beat” writers and poets – including William S. Burroughs, Neal Cassady, Gregory Corso, and Jack Kerouac as well as the counterculture generation. The early photographs were taken as his friends were on the cusp of achieving great fame and notoriety and reveal an “intimate communication” between Ginsberg and his subjects.

Ginsberg started photographing in the 1940s, taking snapshots of his friends and making impromptu pictures in photo booths which were widely popular at the time. (Ginsberg had his film developed at local drugstores and referred to his snapshots as “drugstore” prints.) His experience at Columbia University, surrounded by Kerouac and Burroughs, ignited his creative drive, believing that he and his friends would create “the most individual, uninfluenced, unrepressed, uninhibited expression of art. ” Few of these photographs are well-known and were never meant to be shown outside of his group.

Yet, they compel the viewer to re-examine the ingrained images we have of the Beats – Ginsberg, the balding, bearded guru or the melancholic Williams Burroughs ravaged by years of heroin use. His snapshots, part of his daily routine, are intimate, never forced and without pretention – capturing lover Peter Orlovsky, at the beach sticking out his tongue or quietly sitting in the backseat of a car while Neal Cassady drives, chatting with his female companion. They reflect the nature of his poetry with keen observation and a joyous celebration of life.

For no defined reason, by 1963 Ginsberg stopped photographing, ultimately returning to it in the early 80s. By this time he was a well-known poet who was concerned with preserving his legacy. He revisited his negatives and prints which reignited his passion for the medium. Encouraged by his mentor Robert Frank and New York photographer Berenice Abbott, Ginsberg used Frank’s printers – Ed Grazda and Sid Kaplan – to make prints from his old and new negatives. Abbott had a particular influence on Ginsberg’s photographic work. She encouraged him to caption his photographs which he then executed in his own distinctive style. Ginsberg explored the ways in which in words could be incorporated with images and chose to write directly on the prints. In scrawling handwriting, he never wrote the same words on prints of the same images, thus each captioned photographs is unique.