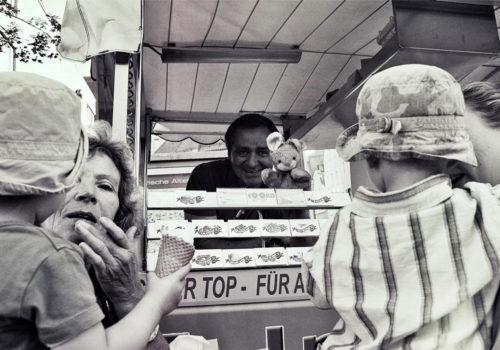 I shot my hometown Ingolstadt for 15 years until I published a book about it last year.
The photographs are created analogously, exposed on negative film, chemically developed – one could say with the technology of the last millennium.
The negative is then digitized with the scanner and made usable.
There are traces in the picture that show the “being made”; like the brightly colored red stripes in front of the house or the bus depot. There are no blemishes, but anomalies that are allowed to live on the pictures. They make something special, like the color of the bouquet in the window of the otherwise monotonous house facade.
However, it is not only the deviations in technology, but also the anomalies of everyday life in the pictures that have found a home in Ingolstadt. Sometimes it is the short moment of the moment, other times it shows a long life. They are allowed to coexist in Alexander Schuktuev’s photographs – the imperfect within the imperfect.
Above all, people are allowed to be with their needs and peculiarities, the old have a place with their walkers on the streets, just like the young in the cafés, mothers and children play with the seagulls on the Danube.
The faces and their surroundings that Alexander Schuktuew captures in the pictures are composed, like the man’s direct gaze through the garden gate, the picture dealer’s staring into the distance or the elderly lady’s smile in the inner courtyard. People seem stranded. They have settled in, come to terms with the place, the now and the anomalies.
Alexander Schuktuew says his photographs of Ingolstadt are like a “touristy” glimpse into the city’s social life. As with the view of the first visit, he wants to use his photographs to draw our attention to the peculiarities and also to the aging, as he often emphasizes.
The longer you look at the pictures, the more you discover this social life in the things, the buildings, their age and their peculiarities.
Alexander Schuktuew