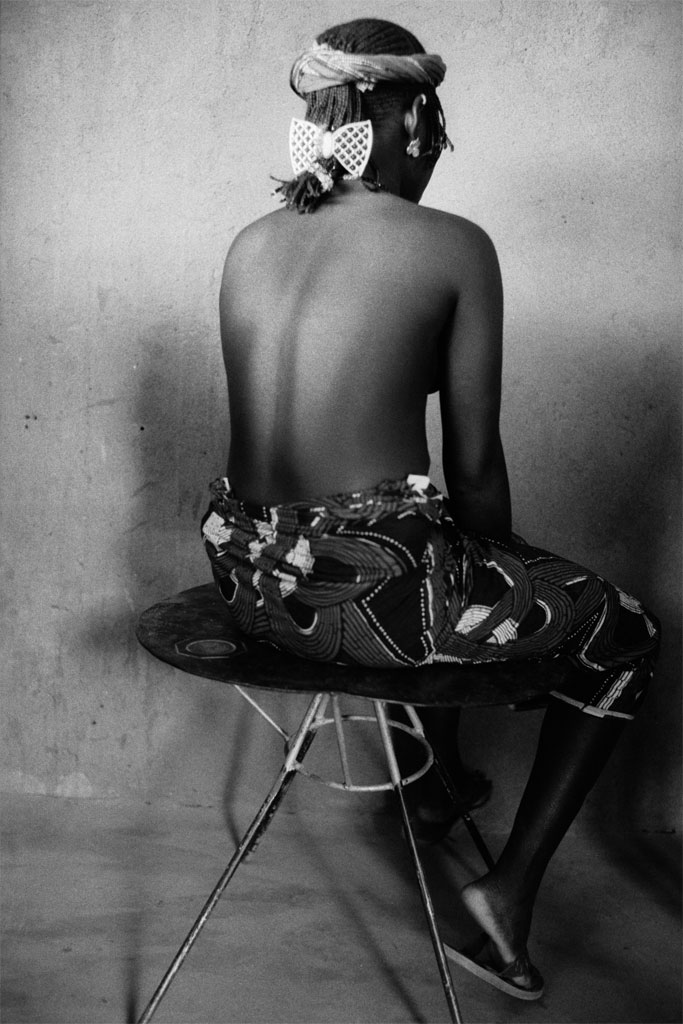 Françoise Huguier
« Sur les traces de l’Afrique fantôme », 1988-1990
« Secrètes », 1995
« Durban », 1997
Polka Galerie is showing 17 exclusive vintage prints by Françoise Huguier. Her photographs reveal the love she has developed over time for the African continent.
Since 1988, Françoise Huguier has been traveling through Africa looking for the “taste of the marvelous”, which has inspired the work of Michel Leiris, renowned anthropologist. Her first book published by Maeght under the name “Sur les traces de l’Afrique fantôme” is a modern travel diary following in the footstep of Michel Leiris who explored the Dakar-Djibouti route between 1931 and 1933. This volume, co-written by Michel Cressole, received the Médicis Price.
As a follow-up to this work, Françoise Huguier went to Burkina Faso, Mali, and the city of Durban in South Africa to learn more about the daily life of African women. Once there, she spent long periods of time with them, going into their homes, discussing with them and most of all listen to what they had to say. Under the singular African light, she created intimate and respectful portraits of these women, which are proof of the close relationship she built with them. These exceptional photographs have been published in a book entitled “Secrètes” by Actes Sud.
Françoise Huguier is a photographer serving photography. In 1991, she discovered the work of Seydou Keïta and Malick Sidibé. Since, she has played a key role in promoting their work worldwide. In 1994, she co-created the first biennial event dedicated to African photography in Bamako, Mali.

Philippe Guionie
« Africa America »
Between 2008 and 2010, Philippe Guionie journeyed through Latin America in search of a forgotten people: the Blacks of the Andean countries. Through the portraits of the men and women he met on the road, the photographer conjures up their roots and recalls their history. These men and women were ripped out of the African earth and driven into Latin America during the massive import of slaves in the 17th century. Philippe Guionie found traces of their culture in Bolivia, Colombia, Chili, Venezuela, Peru and Ecuador where he photographed people of all ages and all walks of life, who either express themselves freely or freeze in front of his camera.
His work is complemented by the writings of Christian Caujolle: “these meetings, this discovery of a universe and a culture, are transcribed by the photographer without mannerism (…) with humanity, through square-format portraits where the light
tenderly draws the forms, the lines, the skin.”

Titouan Lamazou
« Ténèbres au paradis »
Titouan Lamazou latest photographic works “Ténèbres au Paradis” combines traditional techniques of collage to the infinité possibilities of the photographical montage.
The artist brings together hundred of authentic images to create large-scale scenes, which unite instant and time. The series “Ténèbres au Paradis” is the result of Titouan Lamazou’s long exploration of the Great Lakes region.
Five years later, he returns to the East of the Democatric Republic of Congo for the sizeable project: Zoé-Zoé, Women of the World. According through the Titouan Lamazou: “even though they had nothing to envy to the women whose destinies I have crossed during this African journey, which took me through Darfur, Somalia, Kenya, South Sudan and Uganda, I was particularly touched and impressed by the fear and the bravery of the Kivu women.” In 2011, the artist felt the need to return and concentrate on the Eastern border of Congo from Haut-Uele to the shores of Lake Tanganyika.
Polka Galerie is proud to be showing five exclusive prints.

Sebastião Salgado
« Africa »
﻿The great photographer Sebastião Salgado travelled all over Africa for more than thirty years. The photographs he took on the continent, from Mozambique to the sub-Saharan region have become iconic. The book “Africa”, published by Taschen, is now a reference book. Sebastião Salgado’s prints show several aspects of Africa especially
the impacts of war, diseases and poverty. Polka Galerie is showing three big format prints of this dedicated photographer.

Marc Riboud
« Dockers d’Accra »
Polka Galerie presents photographs by Marc Riboud taken in Ghana in 1960 never shown until today.
In the port of Accra, the rod and the breakers prevent big ships from coming in. Marc Riboud captured the efforts of the men, who, aboard their fragile canoes, pick up the merchandises and bring them to shore. These pictures seize the force, the energy and the harmony of these men, the longshoremen of Accra.

Jürgen Schadeberg
« Mandela »
In the fifties, South Africa was in the midst of Apartheid. Jürgen Schadeberg, then artistic director of the magazine “Drum”, where he ran a multiracial team, documented life in Johannesburg. He sought to shed light on the living conditions of South Africans. He took photographs of a young lawyer who have since become historic documents; they were portraits of Nelson Mandela who became the first Black President of South Africa. Thirty years later, Jürgen Schadeberg met up with this leader as he was released from the prison of Robben Island.
Through four prints, Polka Galerie retraces the extraordinary journey of this outstanding man.
En quatre tirages, la galerie Polka retrace le parcours hors norme de cet homme extraordinaire.