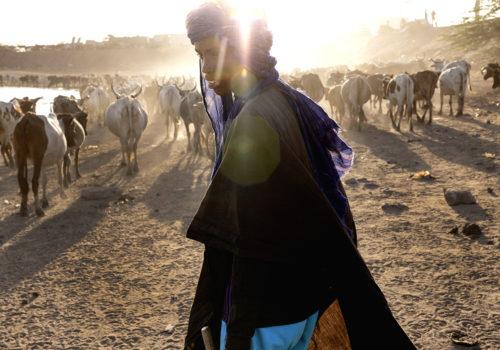 The Académie des beaux-arts is hosting the exhibition Fulani of the Sahel by Pascal Maitre, winner of the 2022 edition of the Marc Ladreit de Lacharrière Photography award- Academy of Fine Arts. Thanks to this award, Pascal Maitre has been working for two years on this project which has taken him to Mali, Niger, Burkina Faso and Benin.

The Fulani people number no less than 70 million men and women, spread over some fifteen countries along the Sahel strip. Population growth and global warming are weakening the situation of this thousand-year-old people, traditional pastoralists, who move through the splendid region separating the sands of the Sahara from the tropical forests. Inter-ethnic clashes between nomadic Fulani communities and Dogon, Bambara and Mossi farmers have exploded in recent years. The jihadist radicalization of a large part of the Fulani in Mali, Niger and Burkina Faso constitutes a major danger for the balance of the entire region. More than ever, the Fulani people are today at a turning point in their history.

Organized around three themes – Celebrations, Daily life, Conflict and its consequences – this exhibition offers a sensitive and rigorous testimony of these communities and will attempt to provide some keys to understanding a region of the world in the throes of a geopolitical upheaval.

The exhibition is curated by Sylvie Hugues, correspondent for

the Academy of Fine Arts.

Born in 1955 in Buzançais (Indre), Pascal Maitre began, after studying psychology, his career as a photojournalist in 1979 in the Groupe Jeune Afrique. In 1984, he joined the Gamma photo agency. In 1989, he co-founded the Odyssey Images agency. From 1994 to 2018, he was a member of the Cosmos photo agency. Pascal Maitre has worked with prestigious international publications, in France (Géo, Paris Match, Figaro Magazine, L’Express), and abroad (Geo and Stern in Germany, National Geographic in the United States). In more than forty countries, He works to show the many facets of the African continent: people and their way of life, politics and conflicts, traditions. If Africa remains his favorite field, Pascal Maitre has also produced several photo reportage on other areas of the world: Afghanistan, South America, Siberia…

His work has been exhibited twice at the MEP (European House of Photography, Paris) and ten times at Visa pour l’image festival in Perpignan.

Pascal Maitre is represented in France by the MYOP agency and abroad by Panos Pictures.