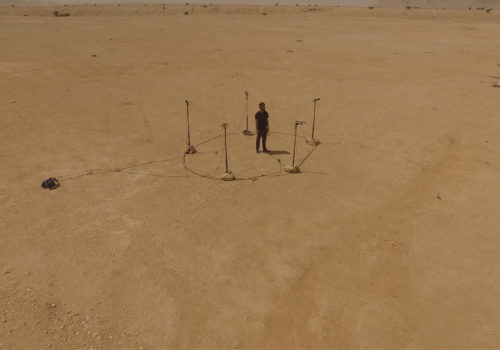 Abdullah Alothman’s works  Sound Carving (2020) was filmed in the Saudi desert. It is part of the video programme conceived by Fabien Danési shown in the Imane Farès Gallery (Paris). This special programme also hosts in the gallery space works by Francis Alÿs, Ali Cherri, Larissa Sansour and many other artists, gathered on a simple thematic: the desert.

This sensory, geographical and even meteorological prism provides the frame to apprehend our world. Its title, “Each vertebra is an extinguished sun”, was taken from Etel Adnan’s long poem with moving verses, Apocalypse Arabe (1980). Whether it be the Sahara, Atacama, the outter space or more broadly, a metaphor, the desert is present in all the works as “a sounding board for individual or collective struggles”.

Sound Carving (2020) features the artist himself in a circle capturing the wind, rustling and stirring sweeping the desert. Through an ellipse that mixes dawn and dusk, Abdullah Alothman confronts the elements and inscribes himself in an immensity to which he is linked by the energy passing through the world. The breath captured in all its power thus becomes an ode to life that is expressed in extreme conditions.

1 – What was the first impulsion of Sound Carving ? Was it a sound, a site, a light, a device ?
Life began with the idea of sound. We move with the rhythm of this sound. A very important discovery to me is that I seek to capture a precise distance in the history of the acoustic experience, in the memory of the place and in human experiences. The installation in the space is this artistic style where I created five sound recording devices and a circuit that symbolizes the time in the Tuwaiq Mountains. After that I did my performance, recording and listening simultaneously to the sound of the desert at different and continuous times from sunrise to sunset. The sound changed with the change of times in the desert. I stood with the dimensions of the sound and its stages, as if I was standing at the gate of the universe, the sound is a mythical human guide to address time, as it penetrates barriers and is linked to all worlds. It is the endless energy of the universe.
2 – In the presentation of your video, you quote William Blake: “I see the whole universe in a grain of sand, and a paradise in a wild flower. Holding the infinite in the palm of my hand, and eternity in the hour. Is your relationship to the desert romantic ?
Maybe. Certainly, I see in it cruelty, love, extension and anticipation. I live in an amazing city, a city within a desert, and I always move between its edges and its depth. This vastness and reflection of the desert in the mirrors of buildings and the talk of people fascinates me. Mirages in the desert gives hope and dream. Therefore, I thought about documenting the desert and the sound in one work, believing in the origin of the desert and its characteristics that are reflected on the person in this place. The desert man has been for centuries and has taken sound as a key to anticipation and exploration. And he understand the voice in himself as a guide to the formation of mountains, and a reassurance for ways and directions. And across every desert, you hear its sound in the rustle of the wind, in the blowing of dunes, and in the breaking of a distant branch. They are voices that have resisted isolation and vast loneliness, and have provided their nights with the possibilities of art, their days with treasures of energy that look to the future.
3 – You used earlier the same apparatus in No Touch – Torture (2015) for which you listened to 21 songs used at Guantanamo Bay and in Abu Ghraib prisons. What was the context of this performance and was Sound Carving a direct consequence of this first proposal ?
For No Touch-Torture,  there was a straight square inside a large square with the intervention of design and sculpture of sound. It was the circle of time with the intervention of  nature, the first  performance probably guided me to withdraw into nature and try to create an internal extended space The act is based on an act based on mental expression communicating on three important levels that work in the same time. First is the body, the biological area. Second, the spirit, the brain and its mental structure, which supports and controls the body. Last, is the psychological-physical element of the spiritual movement and true feelings, which can express itself through the first element and affect the second also. Each one of the first two elements has its own awareness and it is conscious toward what the artist is doing through communication with the represented idea.
Testing an idea that is related to music only is very difficult, you have to interact with the three levels in a room, while you are confronted to solitude. And your own free will to discover what  extent you want suffer. It seems to me that pain removes the metaphor and helps you to reach the point of clear vision, of consciousness. I take part in the safeguard of what we receive from heavens, of the music.