A wind of solidarity blows on the 2019 Bamako Encounters 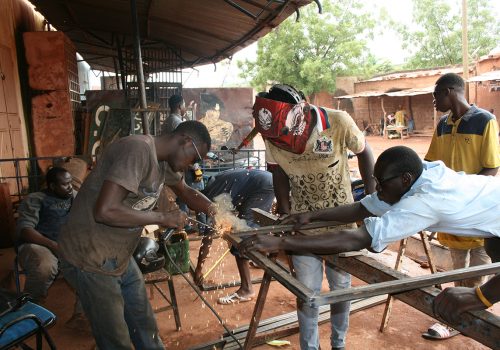 The wonder was visible in eyes a few days ago, when the doors of the National Museum of Mali opened to visitors, impatient to discover the exhibitions concocted by the teams of the Bamako Encounters.

In line with the theme “Streams of Consciousness” imagined by the Artistic Director of this 12th edition, Dr. Bonaventure Soh Bejeng Ndikung, a scenography full of poetry invited the public to stroll between two structures made of oblique wooden planks arranged so as to suggest the movement of the waves, then along a wooden river crossing the exhibition hall and around which stood bamboo tipis covered with fishing line in which one could enter.

For an edition that celebrates the 25th anniversary of the biennial and which marks a historic structural turning point making the Ministry of Culture of Mali the sole organizer of the event, the scenography also had to be up to par. Cheick Diallo, architect, artist and designer of renown, has not failed in the mission entrusted to him, offering the works of selected artists grandiose, daring supports and faithful to the approach that made him known. In fact, beyond his commitment to using locally available materials, the scenographer has adopted a collaborative modus operandi. For weeks, a team of young architects and apprentice scenographers, including the promising Cheick Ouedraogo, craftsmen-welders, craftsmen-carpenters, painters and even weavers took turns and helped each other for hours to provide on time an exhibition setting that we can only salute.

When you visit the various exhibition spaces of the Rencontres de Bamako, 11 in number across the city, it is not difficult to imagine the work that was necessary but above all, the human forces that were called upon to carry out this project. It comes from the biennale, a sweet scent of solidarity that each of the contributors will confirm. Already, solidarity on the part of the artists, who, enthused by the idea of ​​supporting a major event on the continent, did not hesitate to make concessions in relation to the constraints of production and presentation of their works. Thus, some papers or print media will not be available or the prints will not be framed for lack of means, but fortunately, the quality of the prints made for the first time in Mali, will be there.

Despite the constraints which were very numerous for a first, the Framework for Promotion and Training in Photography of Bamako (commonly called CFP), founded and directed by Youssouf Sogodogo, and the African House of Photography (MAP) directed by Tidiane Sangaré, rose to the challenge of printing hundreds of images in record time, the teams working around the clock with professionalism and thoroughness. Despite the shortage of paper stocks, despite the occasional power cuts putting the process on hold, the laboratories have shown enduring patience and perseverance, with the goal of proving to everyone that the production of the Bamako Encounters must be done in Mali, not only because it has the capacity, but also because it cannot be otherwise for an event that takes place in the capital said “of photography” in Africa.

With the same desire to act in favor of the image of the country, the technical and installation teams worked tirelessly to install all 85 proposals in about 10 locations selected and this till the end of the night, even a few hours before the official inauguration. Logistical gymnastics orchestrated collegially by the curatorial team, who also participated in the mounting, the laboratories, the scenography team and the mounting team. Under the leadership of Ange Dakouo, Ibrahim Ballo, Dramane Bamana, Boureima Doumbia, Ibrahim Doumbia, Mohamed B. Keïta, Hamidou Kodio, Alassane Koné, Mohamed Koné, Alhassane Konté and Adama Traoré have nailed the points hundreds of times with their gloved hands. Ready to jump on their motorcycles at any time to support other construction sites in progress, regardless of the distance and traffic jams, the members of the mounting team are the very embodiment of solidarity. If some are still young students at the Conservatoire des Arts et Métiers Multimédia Balla Fasséké Kouyaté (CAMM), they are, for the most part, from or friends of the TimArts Collective, a group of ten young visual artists, many of whom come from CAMM and who have decided at the end of their studies to organize themselves in a collective to rent a space which they use both as a studio and an exhibition hall.

A spirit of mutual aid and sharing that has everything to delight the Artistic Director Bonaventure Soh Bejeng Ndikung, who this year has chosen to focus on collectives of photographers to precisely address the issue of creating synergies inherent in collectives. With the idea of ​​promoting an African world in mind, he wished to question how we can understand, grasp and build a society together, hence the subtitle of the 12th edition of the Bamako Encounters, “A concatenation of dividuals”. Dividualism is a concept from sociology and philosophy that designates a being as part of a whole rather than the singular entity suggested by individualism. Thus, many duets and collectives were selected and asked to present their work at the Rencontres of Bamako: three duets that are the Collectif Orchestre Vide, Harun Morrison & Helen Walker, Nirveda Alleck & Katia Bourdarel, and eight collectives that are AFPM, the Collectif 220, Iliso Labantu, Invisible Borders, Kamoinge, Kolektif 2 Dimansyon (K2D), MFON, and The Otolith Group.

As the artistic director himself points out, it is generally the difficulties that lead to the emergence of united practices. Thus, we find the African-American group Kamoinge formed in the late 1960s to remedy the inaccessibility of publication media in a context of racial segregation. Similarly, the collective of women from the African diasporas MFON and the Association of Women Photographers of Mali (AFPM) are the very indication of a desire on the part of these photographers and videographers to join forces to make their voices heard; voices which too often, under the pretext of the gender, do not find space for projection. One of the most striking aspects of this biennial actually seems to have been the voices of women to address the issue of violence suffered by women themselves, what guest curator Fatima Bocoum raised in her exhibition “Mussow Ka Touma Sera ”(“It is the Era of Women”) presented at the Lycée des Jeunes Filles Bâ Aminata Diallo. And seing the reaction of young high school students, it seems that the photographic medium has become the instrument for a certain form of solidarity capable of reaching consciences more quickly than any other communication tool.

To conclude, it is indeed in the difficulties that the 12th edition of the Bamako Encounters was prepared, but thanks to the commitment of all, thanks to a surge of solidarity at all levels, visitors have been able since November 30, 2019 and will be able until January 31, 2020, to witness the status of the African capital of photography held by Bamako.