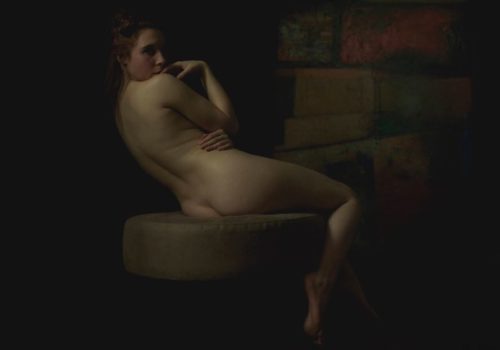 A.galerie presents the romantic work of Ronald Martinez : Nus Divins. The photographic essay is inspired by the paintings of the past, starting with the Renaissance, with a very precise technique of lighting.

Ronald Martinez’s gaze on bodies is an eloquent testimony to the powerful effect Italian luminism had on the pictorial traditions associating chiaroscuro with transcendence.

His works, which stem as much from conscientious research as from subtle photographic intuitions, gracefully illustrate the immense potentialities offered to him who, imbued almost in spite of himself by the light so rich in nuance developed by Le Caravage, Titian, Véronèse or Cagnacci, uses his photographic instinct to cut delicate and sensual scenes in secular realism where the contrasts of chiaroscuro sculpt a graceful nudity with divine accents.

The sometimes assuredly religious staging of his photographs powerfully radiates on the sacred dimension of the body, it is all the contemporary implications and potentialities of the latter that Ronald invokes when he makes his light run over deep and raw skin tones of his characters, plunging whole sections of them into a lunar twilight which then gives them statuary dimensions of colosses with strictly pictorial lightness.

Ronald implicitly evokes postures, scenes, and attitudes traditionally associated with the divinity by sticking to a strict and subtle minimum of clues which give the viewer a delicate feeling of familiarity mixed with the pleasure of judicious and sensitive reinventions.

From his appropriation of the effects of vermeerian blur and the transparent palette of Velasquez, associated with a truly synaesthetic relationship to the body, are born works of great sensory richness where the flesh can be touched through the thin curtain of shadow. which veils them, exhaling a warm pink fragrance carried by a harmonious chromaticism with soft and enveloping cadences.

The flood of light stopped in its course by the thickness of the bodies on which it runs aground remains incapable of showing everything; the subtle clues that he sometimes leave behind are not enough to eliminate entirely the doubt that they were not the fruit of a painter’s artifice.