100 years ago, birth of Louis Dalmas 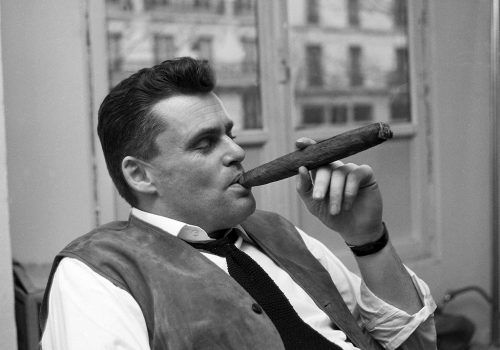 Louis Dalmas created one of the most dynamic photographic press agencies after the Second World War. Endowed with extraordinary energy, he could have made a fine centenary, but, alas, he died on Sunday August 3, 2014 at the age of 94. An exceptional course.

Marquis Melchior, Louis, Marie Dalmas de Polignac dit Louis Dalmas was born in Paris on Tuesday June 1, 1920. His mother Nina Floyd Crosby is an American. She married his father, Marie Charles Jean Melchior1 of Polignac, in 1917 in New York City. They met during the mission of André Tardieu, French High Commissioner sent to Washington to promote the entry into war of the Americans. Between the two world wars, the Marquis de Polignac Père was an influential businessman, aviation promoter, member of the Board of Directors of Champagnes Pommery, member of the International Olympic Committee. But, under the Nazi occupation, he became, to defend his interests, a member of an honorary committee of a group favorable to “collaboration”. Arrested on September 6, 1944, he was dismissed from the charge of intelligence with the enemy. However, he was sentenced to 10 years of national indignity … Immediately relieved of this penalty for “services rendered to the Resistance”.

Melchior, Louis, Marie Dalmas de Polignac will never sign this name, his family weighs heavily on him and he left the family home at 16 in 1936. Student at Lycée Janson de Sailly in Paris, he lived on expedients to continue his studies, baccalaureate, law, letters. He is a great sportsman who practices skiing, motorboating and is  according to his autobiography  spotted by the automobile brand Maserati to become a racing driver, before joining the army as a volunteer when the war was declared.

Patented pilot of the Air Force in Angers, the advance of the German troops makes him fall back in Algeria. With five comrades, he would have made the plan to embark for Gibraltar by flying a “Goéland” plane but the bombardment of the French fleet by the English in Mers el-Kébir dissuades them from it. Demobilized in Algiers in August 1940, he was repatriated to France.

“After a year of difficult daily subsistence in the free zone, without relations and without a penny” Louis Dalmas returned to the capital and became editorial secretary of an art magazine “La Vie en Images”. He contributed to the clandestine newspapers “Franc-Tireur”, “Vérité” and “Front Ouvrier” of Trotskyist obedience, and printed the “Prisoner of War and Deportee Manual”, a pamphlet regularly quoted by the BBC from London.

He worked several times for the Allied intelligence services, became a member of the FTP, animated and supported a maquis made up of escaped Russian prisoners and Spanish Republicans escaped from the Todt Organization. Around the farm, where he took refuge to avoid compulsory labor, he became a liaison non-commissioned officer in a camp of 650 Soviets who had escaped, were refugees or were left behind by the German retreating.

François Crucy (1875-1958) was a journalist and CEO of Agence France-Presse, it was under his direction but especially under that of Maurice Nègre (1901-1985) who succeeded him from 1950 to 1957 that Louis Dalmas began his career in the free press, AFP. He then worked in the editorial office of the overseas department. He left the AFP for Paris-Presse, then for the United Press (UP) agency, then, worked for a time for the daily Combat …

He was part of the militant team of the ephemeral adventure of the Revolutionary Democratic Rally (RDR) with Jean-Paul Sartre, David Rousset, Father Pierre and Claude Bourdet… He was then hired by the great weekly magazine of the time, France Dimanche, with Max Corre, Bill Higgins, Armand Jammot, Gérard de Villiers, Maurice Siegel etc. Remember that France Dimanche then printed more than a million copies!

He then went on to collaborate, “Les Temps Modernes” and the “Tribune des Peuples”, with KS Karol, Michel Crozier and Jean Duvignaud. Became special envoy of France-Soir, interviewed Marshal Tito after his break with Moscow, Nasser, Ben Gurion, the Shah of Iran without forgetting Gina Lollobrigida and Sophia Loren. We can never stop quoting all the personalities he met!

Louis Dalmas then had a scientific and medical journalist period, in particular at “Science et Vie” and which will end with the creation of his own press agency: the Dalmas agency!

Agence Dalmas will have more than 75 employees!

The Dalmas press agency, which he founded on July 14, 1955 with photographer Louis Foucherand, was to be incredibly successful, making it “The most important reporting agency in Europe”, according to Louis Dalmas himself.

In fact, in these years of reconstruction, there were a few agencies that survived the Nazi occupation: Keystone, United Press, Associated Press, Robert Cohen’s AGIP, etc. Rapho revived in 1946, the American Magnum Photo was created in 1947 in New York, but there was room for another type of photo agency. We will name them ” Feature Agency” as opposed to “Telegraph Agencies” (AFP, AP, UP) which still worked with wirephoto and favored distribution to the daily press.

The agency of Louis Dalmas is in the same category as the agency of Reporters Associés of Lova de Vaysse, Europress of Raymond Darolle, or the agency APIS of Jean Garnier. These agencies are served by abundant news: the war in Indochina, Korea and Algeria, the return of Charles de Gaulle to power, the richness of the cultural world (cinema, theater, song).

The Dalmas agency will have more than 75 employees, will have large premises, including one exclusive at the new Paris-Orly airport to photograph the stars that land and take off … At Dalmas, in addition to the well-known collaboration of Raymond Depardon, Louis Dalmas will work with a large number of professionals known at the time or who became known. Floris de Bonneville will take over as editor-in-chief for a while before being invited by Raymond Depardon to participate in the Gamma adventure which will transform the market.

But what characterizes the Dalmas news agency is its search for “shots”, “scoops”, even if it means manufacturing them. In June 1956, for example for Paris Match, the Dalmas agency organized the jump of “La fiancée du ciel” Colette Duval a model, parachute jump from the altitude of 11,147 m, a record! Then, Gil Delamare, a stuntman, friend of Colette Duval, jumps by parachute on the liner “Santa Maria” hijacked by mutineers. In July 1959, the agency hired Colette Duval in the Paris-London race between Marble Arch and the Arc de Triomphe, organized by the Daily Mail. In August 1960, the agency organized the “Sahara” operation to find lost soldiers by sending Raymond Depardon also mobilized on the kidnapping of “little Peugeot”, and then like the other competing agencies, the royal weddings of the courts in Europe are great sources of income!

It must be said that in the 1950s and 1960s, television sets were scarce in homes and television did not yet have light means of transmission. The photo is king, the prints of the daily newspapers, in particular of France-Soir but also of France Dimanche and Paris Match exceed the million copies!

This post-war world will gradually give way to the rise of new lifestyles created by “baby boomers”. to Gilbert Bécaud, Edith Piaf, Luis Mariano and Maurice Chevalier will succeed the Beatles and the Rolling Stones. Television managed by the Ministry of Information will be followed by a color and moving television … The Algerian war and its politicians will be followed by demonstrations against the war in Vietnam. May 68 will put an end to the period of reconstruction and Europress, the Associated Reporters, and Dalmas will be buried by the young team led by Hubert Henrotte at Gamma where we would soon find the photographic talents who made their classes with the Louis Dalmas, Lova de Vaysse, Jean Granier.

In the early 1980s, Louis Dalmas sold his publications, premises, technical installations to various buyers and the Dalmas agency’s archives (five million photos) to the SIPA agency. He then founded the monthly “Balkans-Infos” which became in 2002 “B. I. ”, an independent newspaper devoted to foreign affairs, distributed only by subscription,“ which revealed the hidden truths of international politics which are often very different from the official versions. ”

See the Dalmas agency page on A l’oeil