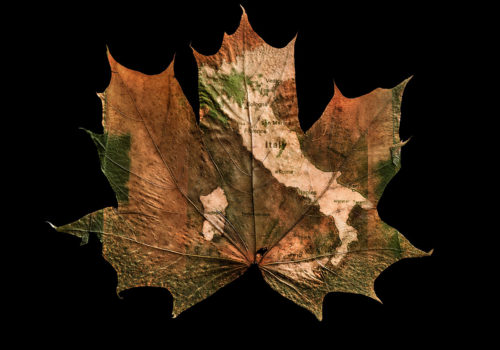 The exceptional creative signature of Žilvinas Kropas has been visible for the majority of Lithuanian photography admirers. In his new series Embodied Extinction the artist returns to the source of the ancient, simple photography techniques, raising the subject of the origins of photography.

Before beginning an in-depth analysis of the creative work, I would like to note the most important facts from the artist‘s biography. Žilvinas Kropas is an educator and a creator of alternative photography who lives and works in Panevėžys. Since 2012 he has been a member of Panevėžys Photography Association, since 2017 his work has been represented by “Art Gallery of Gabrielė” (Kaunas). In 2019 he was awarded the status of Art Creator by the Lithuanian Ministry of Culture, and in 2020 Žilvinas Kropas became a member of Lithuanian Photography Association. The artist arranges personal exhibitions and is an active participant in collective exhibitions; his photographs have been exhibited in Lithuania, Poland, United Kingdom, South Korea, Vietnam, Argentina, Chile, Mexico, Belarus, etc. The creative work of Žilvinas Kropas is extensively covered in the cultural press of Lithuania, USA, France, Spain, Mexico, etc.

The newest photography cycle Embodied Extinction talks to the viewer by questioning the temporality and fragility of the world. The photographs display prints of plants the artist himself compares metaphorically with maps:

[…] a leave of a plant presented as a map is a purposeful choice. It is a material that mirrors perfectly the cycle of life, the transformations of time and space. […] The leaf-map symbolizes nature, the transformation of which is impossible to resist[1].

Notably, maps exist because of the natural necessity to mark the boundaries, which helps us to define the identity of the environment or our own identity within specific, shifting geographical coordinates.

The prints of leaves created by Žilvinas Kropas encourage a romantic reflection on the human need to mark the sea currents, the underwater rocks, the contours of shores, the lowlands and the highlands. Maps demonstrate the necessity to mark things that relate to human activities. As Sikora Adam (b.1960) puts it:

[…] graphic representation is important not for perceiving some secret essence of being, but for taking the world into one‘s hands and overcoming it, so that it could satisfy human needs[2].

Thus, the visual study of plant leaves performed by Kropas is like mapping the time of the past that we read (similarly to most other works of art) intuitively, without searching for logic.

Allusions to maps provoke discussion about the graphic expression of communication that is profusely developed in the contemporary field of information design. Informational graphics may be perceived as transmission of information through vivid artistic means. One thing is clear, interesting as information may be, people understand it better and faster when it is expressed visually. In this way universal graphic symbols emerge and the traditions of graphic representation develop progressively. Therefore, reflecting on the strategy of Žilvinas Kropas‘ artistic language and regarding his new cycle of works we may turn to the concept of mapping.

Notably, Kropas‘ prints of plants (especially flowers) deserve specific attention of the viewer. The essential question here is why are we fascinated by the images of plants? In natural habitats the function of the plant flower is purely reproductive. During the billions of years of existence more than 400 000 species of flowering plants have developed. They compete among themselves, attracting the attention of insects with different colours, forms and scents. In human culture flowers are meant to express emotions, to enhance emotional balance, to better the impression of the residential or other space. Plants are also used in the production of perfume, medicines and food. But most interestingly, it is considered that because of their form, colour and scent some flowers as well as their whole foliage resemble edible fruits. It is that what causes our fascination with plants, even those that are imprinted in the photographic images of Kropas.

The physicist David Deutsch (b. 1953) thinks that admiration with plant structures is conditioned by the objective category of beauty[3], i.e. the viewer is attracted to the harmony of colours, forms of leaves and their fractal structure. Though plants are perceived individually, their images encourage the creation of culturally-socially engaged signs, disseminating them via artworks. For hundreds of years artists elaborated on the symbolical meanings of various forms of plants, continually verifying and transforming the meaning of a particular plant in fine arts.

The methodical and consistent art language of Žilvinas Kropas, developed for a number of years, verifies the phenomenon of herbarium. Notably, however, the artist does not make any particular emphasis on this concept. Herbariums belong to botanical studies.

The oldest botanical illustrations are dated first century BC. The Greek physicist Krateus was the first to begin drawing images of plants in precise detail. This practice was continued and perfected in the Middle Ages and Renaissance. The richest heritage of botanical studies comes from 1750-1850. This period is considered the golden age of botanical illustration. The most famous authors are Joseph Banks (1743 – 1820) and Pierre Joseph Redouté (1759 – 1840). They travelled the world and registered every plant they would see, studying plants in a scientific manner and introducing the newly discovered species on their return to Europe[4].

The essence of botanical illustrations that Žilvinas Kropas reverts to is a unique image of every single plant. But contrarily to the classics of herbariums, the artist does not attempt to eliminate the defects of the leaves (their wrinkles, holes, etc). Like the artists of the eighteenth – nineteenth centuries, Kropas studies many samples of the plant, registering them attentively in photographic images that formulate the typology of plant transformation, in this way producing a peculiar cartography of time and space.

In this manner, space and time, stability and fragility intertwine in the works of Žilvinas Kropas like in maps. Following Edmund Husserl (1859 – 1938) it is possible to claim that photography shows that time which is rationalized by consciousness is not the same time in which it lives[5]. Photography allows us to be in two spaces at the same time – that of the image and that of the reality.

Kropas’ photographs display the prints of plants that existed in an earlier reality. Following the theory of Jacques Derrida (1930 –2004) it is possible to claim that the images of the plants seem to splinter off from a past that existed, remain in the prints and insert themselves into our time/ space[6]. The works of Kropas are like a conscious, visual and intellectual game of being – non-being. On the other hand, photography registers everything like a scientific report based on facts, in which we encounter formerly alive structures that cannot change anymore.

Photographic images present everything in a manner different from memories which may be moulded in any way in relation to space and time. Photographs revive the time of the past in the moment of the present.

In this creative cycle of Žilvinas Kropas photography performs the role of a certain time machine – it revives a different epoch and transfers it into ours, even though we continue with our lives and their unique directions. The images display everything that is sensed in reality and at the same time in nature. Objects and forms in reality seem to flow and, according to Plato, there are no primary materials that would resist division and formation of new objects. Jostein Gaarder (b. 1952) puts it as follows:

[…] Absolutely everything that belongs to the “material world” is made of a material that time can erode[7].

Photography proves us that space exists as if full of atoms that continually move, collide, unite and are divided[8]. Photography brings temporality to a halt and at the same time proves its existence.

The objective reality seems to exist separately, but photography connects it to us quite intuitively. In this case the world is not just a totality of sensual experiences. Contrary to the majority of contemporary culture consumers, Žilvinas Kropas demonstrates that he cares about the input of previous generations into the visual narrative, the ratio between the form and the contents revealed through the mastery of technology and image creation. That is why, probably, Kropas withdraws himself from the photography that uses the universally accepted popular codes, where images try to accumulate as much popularity as possible. Here we may remember Guy Debord (1931 – 1994) who related popularity to power and industrial production of images; he believed that the necessity to seek after commercial success turns an artist into a puppet of the image industry[10].

Without doubt, the artistic work of Žilvinas Kropas is very deep. By means of photography the artist returns to the question of identity. He makes us regard a photograph and ask about the Dasein[11], the existence (what is depicted here, what participates here, what remains here and what is already usurped by the past?)

Finally, Žilvinas Kropas’ self-analytical insights[12] state that the images of leaves demonstrated on the photographic planes are metaphorically testing the temporariness of the world, states, cities, where finally the world itself turns out to be a merely temporary stop. The temporariness is introduced by the magical process of chlorophyl photography, during which the image seems to transfer itself inside the plant and take over it without any camera, any usual photo-chemistry or photo-paper; in this way photography itself remains somewhere beyond photo… As not all plants allow foreign bodies into themselves, new questions arise (why, how, what for?)…