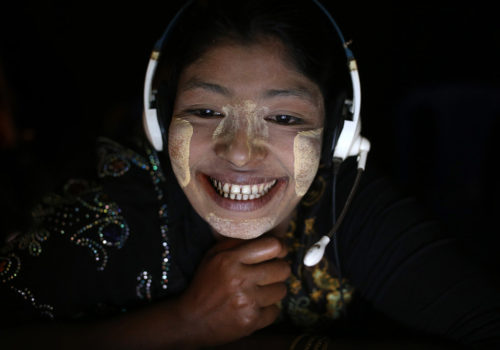 The 7th Edition of the Yangon Photo Festival organized by the French Institute in Myanmar with the support of the French Embassy and International Media Support (an NGO funded by Denmark Sweden and Norway), under the theme of I LOVE YOU was opened on the 14th of February, the Valentine’s Day happened to coincide with the 100th Anniversary of General Aung San’s birthday, the Father of Burmese Independence, so this is not only a time to reflect on the evolution of the concept of romantic love as  experienced between individuals, given today’s social changes, gender and identity issues, but also a time to reflect on loving kindness between the people and their leaders, and among the people particularly when the country is undergoing ethnic and religious conflicts at its border.

One of the major achievements of the YPF is that years of training workshops have actually produced a new generation of Burmese young photojournalists, now working for local media and also for Reuters and AFP, etc. The workshop is based on the concept of telling a story in the form of essay, to encourage participation the Festival serves as a photo competition with prizes ranging from cameras to trips to France to ( the Arles Festival and school of photography, or Visa the Perpignan Festival).

The 2015 annual photo essay competition for Burmese photographers, presided by Aung San Suu Kyi had 80 submissions, from which sixteen finalists were selected and projected on screen in the fresh tropical garden of the Institut Francais. From these the jury voted for six winners. Close to half of the finalists are already professional photographers, or photo-journalists, all have been trained in the photo-workshops initiated by Christophe Loviny  seven years ago, some of them have become trainers themselves. Here are three of the best essays.

The first prize was rightfully attributed to photographer Minzayar Oo’s essay titled “Peace Be with You”. Minzayar who was recruited by Reuters, has covered the outbreak of ethnic violence in the Rakhine region in 2012 between the Rakhine Buddhists and the Muslim Rohingyas resulting in 140,000 displaced persons. This January 2015 Minzayar went back to Rakhine to survey the sanitary crisis in refugee camps after the expulsion of Medecins Sans Frontiere by the local military. There he discovered an undocumented human tragedy: the fate of young Rohingyas who have fled by boats to neighboring Malaysia and Thailand but have fallen prey to traffickers who extort huge ransom from their relatives who have stayed in the camps. Those who cannot pay are often sold as laborers on Thai farms or into slavery on Thai fishing boats. In the best or worst example of modern technology, Skype from the camp’s Internet huts becomes the vital link for families to reunite with those who have been freed, or to negotiate with the captors. Minzayar’s documenting  the families’ plight is a dramatic testimony of the helplessness of these persecuted people, qualified by the United Nations as one of the most persecuted minorities in the world. Minzayar spent one week in the Internet huts to capture each day the joy and the distress as families are reunited with their loved ones or torn apart by the traffickers.  Under his discreet camera, the callers are totally self-absorbed in the video conversation with their sons, their brothers, or their husbands, completely oblivious to the presence of the photographer. Their faces transfigured by bewilderment and shock, tears of pain, laughter of joy, illuminated solely by the cold screen glow, have formed an extraordinary poignant series of human emotions. What a powerful testimony , when a woman closed her eyes in a  state of bliss after her husband on the other end of the connection told her that he wanted to kiss her. She replied, giggling: “But there are too many people here!”

The closing goodbye of these conversations “Peace be with you” accompanied by Skype’s ringing tone so familiar to many of us, will forever be associated with the haunting faces of this human tragedy.