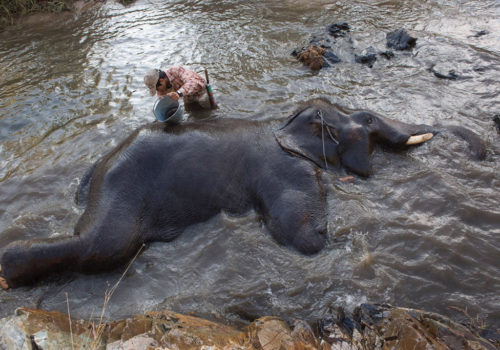 Not only is this a story of love between an animal and a man, there is also an ecological message about conservation. With dexterity and sensibility photographer Ko Myo manages to fit an elephant’s massive volume inside a photo frame, which is a technically daunting task and a psychological challenge to come so close to the subject, the story also required the constant, daily presence of the photographer with the mahout and the elephant as they work, rest and play.

Ko Myo’s CV says he was born in 1978, a Buddhist Burmese of ethnic Mon, an IT expert and a “certified ethical hacker”, who has been working as a freelance documentary photographer. He is one of the local photographers who were trained by the photo workshops set up by YPF over the years. His new work “Brothers” won the 4th prize at the 2015 Yangon Photo Festival, but in 2014 he was already voted 4th best essay with a documentary called the “Boat Cemetery”.

Ko Myo has touched the jury’s heart with this simple story of an 18 year-old elephant with a mahout named Kalu Sai born in a Karen elephant camp eighteen years ago, the two form an inseparable pair working a busy schedule of road shows. When Kalu Sai was eight years old, an elephant calf was captured. Since then they have grown up together like brothers. Kalu Sai’s family has been mahouts for generations, his special relationship with Phoe Kwar the elephant is based on loving kindness, not  on the iron hook. He tames and trains his animal friend with food, talk and gentle rubbing. Phoe Kwar loves teasing and playing, but during mating season he becomes hot-tempered and three people are required to help calm him down, Kalu Say can only sympathize, because he himself has no girlfriend.

Phoe Kwar belongs to a business woman and has a market value of 80,000 USD, because of deforestation and mechanization of timber exploitation in Myanmar, elephant owners turn to renting out their elephants for festivals and religious ceremonies. For each performance they make between 400 to 800 USD, and Kalu Say is paid 5 dollars per day, while elephant Phoe Kwar needs 50 dollars of food per day. Constantly on the road, their job is a hard-earned one and a tiring journey, with only two to three days of rest per month, when they can return to their village. Compared to performing circus tricks for tourists or begging in the streets like in Thailand, their life is still more humane.

Experts estimate that there are 5,000 wild elephants left in Myanmar and 4,000 domesticated elephants, the dwindling population will be extinct within twenty years if nothing is done. Poaching for their tusk is rampant to serve the ivory demand in China, and due to increasing tourism, there is also a poaching, trading and smuggling of Burmese elephants especially baby elephants, into Thailand (one elephant per week according to official reports). Often the wild elephants after capture undergo harsh training that include beatings and starving. This context makes the delicate reportage of Ko Myo all the more humanistic.