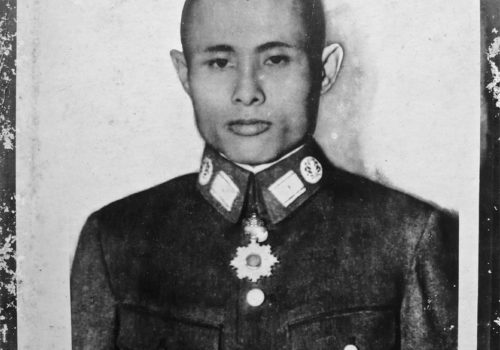 The 7th Yangon Photo Festival opened on the day of the 100th Anniversary of General Aung San’s birthday (13 February 1915), on the eve of Valentine’s Day, hence the festival is placed under the theme of “Love”, that encompasses love from a people for their leaders as seen in these two world premiere exhibitions: one is by Burmese photographer Maung Maung Gyi about the funerals of General Aung San, considered as the Father of Burmese Independence who was assassinated the 19th July 1947 in Rangoon when his daughter Aung San Suu Kyi was barely two years old. The other is a reportage by an American student photographer Seth Beckerman who was riding the funeral train that carried the body of Bobby Kennedy who was assassinated June the 6th in 1968, to the burial ground at Arlington National Cemetery in Washington. Both works have never been exhibited before.

The curator of the General Aung San Exhibition, “the Last Homage” is Khin Maung Lay, better known as the Pictureman. His father Maung Gyi (1904-1976) was born in Lat Saung Yu a small village near Mandalay. MMG attended high school in Sagain and studied English. When the school closed in 1920 because of the student demonstration he moved to Yangon, where he learned photography as an intern in a studio set up by a German photographer who had married a Burmese woman. Eventually MMG set up his own studio, taking portraits with box cameras, and with glass negatives at the beginning. After WWII he became a well-known professional photographer and took many portraits of General Aung San and his wife Daw Khin Kyi. After General Aung San’s assassination he photographed the crowd of mourners lining the street in the center of Rangoon, between the Sulé Pagoda and the Anglican Cathedral. A very emotional moment was when Aung San Suu Kyi visited the exhibition, she paused and contemplated in silence the enlarged print of her father’s funeral procession.

In the spring of 1968, Seth Beckerman was a senior student at George Washington University. While the nation was still reeling from the assassination of Martin Luther King Jr. in April, Senator and presidential candidate Robert F. Kennedy was shot in Los Angeles on June 5, five years after his elder brother, President John F. Kennedy.

The Kennedy press office wanted some student journalists on the funeral train, and Beckerman was lucky enough to climb on board, and took over three hundred negatives of people that came out to pay their respect along the tracks for the 200 miles between New York and Washington. “What was then normally a four-hour trip took well over eight hours — the train moved slowly to accommodate the masses of people, which often crowded dangerously close to the tracks.” Wrote Beckerman. It was later reported they numbered about one million people.

As tearful crowds lined the tracks to say goodbye to the assassinated presidential hopeful, Seth Beckerman captured some curious scenes from the day: a family of four wearing sun glasses and holding hands stood along the tracks with their car parked behind them, a vintage Pontiac Bonneville (built in 1959), they were probably listening to the radio that they placed on the hood of the car.  Another image shows three Catholic nuns in black robes standing in the back of a white pickup truck as small clusters of people stared at the passing train, forming a classic black & white iconic picture.

The pictures of “Last Journey of Robert Kennedy” at the Yangon Photo Festival are exhibited for the first time since 1968, thanks to the discovery of Christophe Loviny. They created a poignant visual counterpoint to the funeral procession of General Aung San of 1948, the exhibition placed nearby, of another national leader killed by assassin’s bullets, they reflect a time long gone of charismatic and idealist political leaders, in two culturally very different countries.