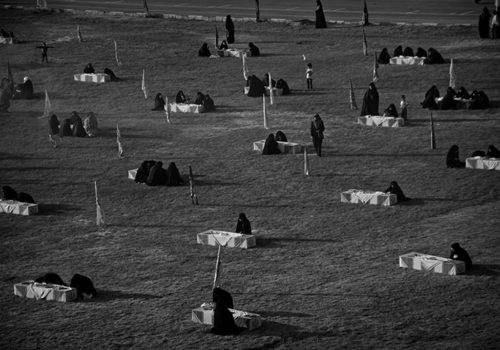 A double exhibition intelligently curated opened at the Gallery Myanmar Deitta – a hundred years-old house hidden in a small lane (44th Street) by the docks of Yangon, the gallery is run by Yuyu a former journalist with the Myanmar Times. She decided to dedicate herself to showcasing the best documentary photography works by Burmese photographers, the name Deitta comes from Sanskrit meaning “witness”. In a first of its genre, the double exhibition reveals the eye of two witnesses of the past and  present day in Iran. Two Iranian woman photographers reinterpret each in her own way the enduring Motherly love for lost sons and of the towering Fatherly figure above daughters.

Fatemeh Behboudi is an Iranian Photojournalist from Tehran, who has worked for Iranian Quran News Agency after graduating from photography study in 2007. In 2013 she won first place for feature story at pictures of the Year International (POYI) and her work “Mothers of Patience” was awarded “Honorable Mention Stories in Contemporary Issues” by World Press Photo 2015. The Iran-Iraq War of 1980-1988 was one of the longest and bloodiest conflicts of the 20th Century, most of the mothers of sons missing in action are now 70 to 80 years old and they have been waiting from 20 to 30 years for the return of their sons, dead or alive. ‘Mothers of Patience’ is part of Fatemeh’s larger project titled ‘Iran after the War’.  Although images of violence and ravage are absent, her stark black & white portraits of human tragedies are reminiscent of James Nachtwey’s and Stanley Greene’s war photography. This mother keeping her door open all these years waiting for her son can only be the metaphor of the open wound. “Time heals no wounds, the greatest grief on earth, I fear, that is to lose what one holds dear”, wrote Danish poet Steen Steensen Blicher (1782-1848).

Nafise Motlaq is an Iranian documentary photographer and journalism senior lecturer at “Universiti Putra Malaysia”. She worked for newspapers in Iran before moving to Malaysia in 2004 to continue her studies in PhD Mass Communication. Her first photo book, titled “A Given Path”, was published in Malaysia in 2010 and was selected as one of the best 50 titles for international rights. The idea of Nafise’s work “Iranian Fathers and Daughters” was born after she had been living and working in Malaysia for 11 years, as she realized most people had a misconception and wrong perception of Iran, and also because of her strengthened bond with her own father after the latter nearly passed away . So in 2014 in one of her home visits to Iran she started to portrait figures of Fathers and Daughters from all walks of society. Each daughter is asked to make a comment about her father. She had some trouble finding a religious figure who would accept to pose, therefore this portrait of a cleric cum librarian of a mosque stands out as especially precious, daughter and father are separated by a tree that symbolizes growth and shelter, and is  also a barrier between them, in their eyes and smile, there is an undeniable resemblance and tenderness. In a way Nafise Motlaq’s Fathers serve as a bold contrast to Fatemeh Behboudi’s Mothers, revealing two faces of Iran, the past and the present, perhaps the future. To quote Stanley Greene’s words, “At first you see an open wound, infected and disastrous. It breathes chaos and death, it cries to be reborn. Look closer at the open wound, and you can see the past, take a closer look and you will see the future.” We could see in Nafise’s daughters the future of Iran.