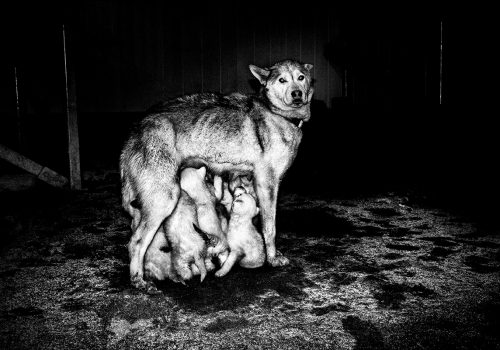 Unuua is a work of photographic creation devoted to hunting and to the Arctic night. It was carried out in Nunavut (Iqaluit, Pond Inlet) and in Nunavik (Salluit) between 2013 and 2018.

“In the course of a number of journeys in polar territory, I succeeded in integrating myself into Inuit communities and families with whom I learned to hunt goose, caribou, seal and narwhal. I became friends with certain hunters, who introduced me to rituals and to the ancestral skills anchored in Inuit culture.

“In winter the inhabitants of the far north live in darkness almost the whole day, whereas in summer, brightness prevails nearly all night. Unuua (Night) is therefore not a synonym for darkness. From one season to the next, the pace of life undergoes radical change. People virtually stop sleeping, they socialize, move about the village and hunt on the territory both day and night.

“According to the anthropologist Guy Bordin, ‘In the context of a sky where the sun barely goes down, we approach the night, not only from a physical or astronomical point of view, but a human one.’ With that as the starting point for my thinking, I did some work with flash that, above and beyond its technical and esthetic properties, became a means of connecting with the people photographed and a creation context influenced by the nature of the relationship that developed with them (apprentice/master, Qallunaat [white man] / Inuit, friendship, etc.). This resulted in an intimate representation of Inuit culture, its lifestyles and the material conditions in which life is organized in the village or the hunting area.

“I would like to especially thank Aaju Peter, a lawyer and activist from Iqaluit; Christopher Moses, a hunter from Salluit; and Ruben Aton Komangapik, an artist in Pond Inlet, who invited me into their families and their communities. I also thank the Avataq Cultural Institute in Nunavik; the Conseil des arts et des lettres du Québec; the Mobilizing Inuit Cultural Heritage program at York University, Toronto; and Air Inuit and First Air for their financial support.” – Yoanis Menge

Yoanis Menge studied photography at Cégep de Matane. From 2006 to 2010 he continued his training with Magnum Photos in Paris as an assistant to photographers Josef Koudelka and Bruno Barbey. In 2016 he published his first book as an author, Hakapik. His work has been exhibited in Canada and abroad and can be found in a number of private and public collections, among them the Arrimage collection of artworks in the Magdalen Islands and at Musée Pointe-à-Callière in Montreal. He has been the recipient of several awards and grants. Currently he is leading a doctoral thesis in studies and practices of the arts on hunting in the northern communities of Nunavik and Nunavut, in collaboration with the Université du Québec à Montréal’s International Laboratory of Comparative Multidisciplinary Study of Representations of the North.