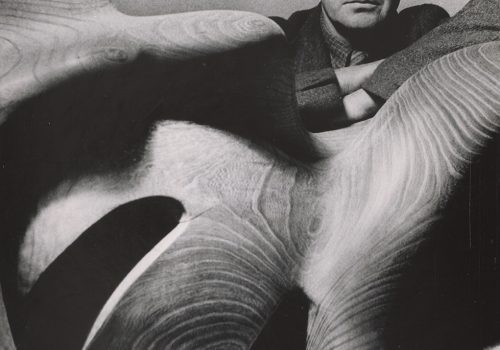 Bill Brandt (1904–1983) and Henry Moore (1898–1986) first met during the Second World War, when each produced images of civilians sheltering in the London Underground during the Blitz: Brandt’s photographs and Moore’s shelter drawings today rank among the iconic works in their oeuvres. A new richly illustrated book, Bill Brandt | Henry Moore, published by Yale Center for British Art in association with Yale University Press, begins with these wartime works and traces the parallel and intersecting paths of the two artists over the postwar decades.

Brandt is revealed as a photographer attuned to the vitality of sculpture and the plastic potential of nature, landscape, and the body. Moore is shown to be a sculptor, draftsman, and collage artist who made a serious commitment to the art of the camera, not only to document his work but as a creative medium. Both artists were deeply engaged with the materiality of their media, seeking depth and dimensionality even in the seemingly flat surfaces of paper.

Bill Brandt | Henry Moore features photographs, drawings, and sculptures – some never before published – that responded in real time to the terror and destruction of war. Brandt and Moore brought out the uncanny tomb-like conditions of underground tunnels and crypts that had been turned into makeshift domestic shelters. Their dark, atmospheric images transformed the dismal ordeal of the blackout into elegiac and haunting compositions. During the war, Brandt’s photographs and Moore’s drawings were shown side by side in magazines and exhibitions.

Bill Brandt | Henry Moore brings together a series of penetrating portraits of Moore taken by Brandt over three decades. Alongside, their visual synchronicities and creative preoccupations are explored. Brandt’s images of unemployed families, coal miners, and housing estates from 1930s Depression-era Britain obliquely reflect Moore’s personal history as one of eight miner’s children in a Yorkshire colliery town. Moore’s own coal mining drawings contribute to a visual culture where coal was understood as vital to Britain’s survival.

On the flip side of these dark and claustrophobic wartime subjects are the isolated light-filled landscapes and great megalithic sites of Britain to which Brandt and Moore were drawn throughout their careers. During the pressured decades of the 1940s and 1950s, the ancient geology of the land offered powerful symbolism of Britain’s resilience. In Brandt’s photographs and Moore’s sculptures and drawings, Stonehenge and Avebury appear as timeless emblems of national creativity and culture. Moore made it known that he used stone quarried in Britain, making his sculpture geologically and mythically British.

In the later decades, Brandt and Moore increasingly attended to intimate subjects that emphasized individual experience. Notwithstanding Moore’s growing importance as a public sculptor, for him as much as for Brandt, the subjectivity of nature and the human body became a primary focus. The book reproduces little-known works in which found objects such as shells, pebbles, bones, and driftwood are explored as figurative sculptural forms—a shell could stand for a torso, a limb for a pebble, a foot for a cliff.

In this innovative publication, prominence is given to works that are often considered peripheral or secondary: newsprint, magazines, negatives, contact sheets, cut-outs, and unfinished experiments in collage are placed on equal footing as sculptures, drawings, and photographic prints. The book takes an unusual approach to the reproduction of photographic works, capturing the materiality of the print as a singular, three-dimensional object rather than a flattened image on the page. Beautiful illustrations of the artists’ works are shown alongside pages from popular period magazines such as Life and Picture Post.

The book, Bill Brandt | Henry Moore, coincides with a major exhibition of the same title organized by the Center in partnership with The Hepworth Wakefield.

Martina Droth is Deputy Director of Research, Exhibitions and Publications, and Curator of Sculpture at the Yale Center for British Art. Paul Messier is Pritzker Director of the Lens Media Lab at the Yale Institute for the Preservation of Cultural Heritage.

This publication is made possible with generous support from David Dechman and Michel Mercure, Laura and James Duncan, Yale BA 1975, and the John Pritzker Family Fund.

ABOUT THE YALE CENTER FOR BRITISH ART

The Center houses the largest collection of British art outside the United Kingdom, encompassing works in a range of media from the Elizabethan period to the present day. It offers exhibitions and programs year-round, including lectures, concerts, films, symposia, tours, and family events. Visit the Center online at britishart.yale.edu, and connect on Facebook, Twitter, Instagram, and YouTube @yalebritishart. #BrandtMoore