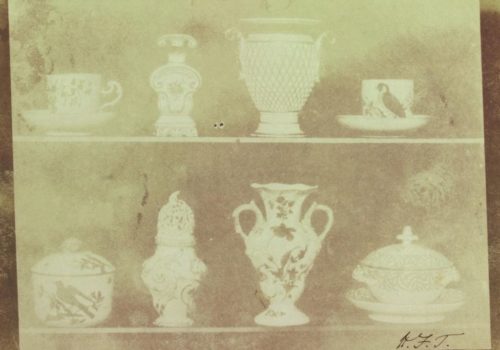 In the first half of the 19th century: the history of Modena intersects with that of the great European capitals and, in a way, with photography. The exhibition at the Galleria Estense deals with William Henry Fox Talbot (1800 – 1877) and his links with Italy and Modena (by the way, the centre of the town is on the UNESCO World Heritage list). On show, also the autograph correspondence between Talbot and the Modenese optician and astronomer Giovanni Battista Amici (1786-1863).

The imprint of reality. William Henry Fox Talbot. At the origins of photography (episode 4 in our ideal trip in the Emilia Romagna Photo Valley) compares the work by Talbot, the inventor of the negative/positive process, which is the basis of the development of the era of technical reproducibility, with the works by other artists, scientists, photographers. More than a hundred calotypes and photogenic drawings, daguerreotypes and contemporary photographs are on display, together with some scientific instruments. Indeed, at least in September 1822, Talbot was in Modena in order to meet Amici, the most important Italian manufacturer of optical instruments of that time. Their relationship is testified by 18 letters and some ‘photographic evidence’ the inventor gifted to Amici, preserved within the Biblioteca Estense.

The concept of photography was born in 1833. Talbot was on Lake Como and he didn’t succeed in sketching the views of the landscape despite the aid of the camera lucida. So he thought of his experiences with his camera obscura “and this led me to reflect on the inimitable beauty of the pictures of nature’s painting which the glass lens of the Camera throws upon the paper in its focus – fairy pictures, creations of a moment, and destined as rapidly to fade away. (…) The idea occurred to me. How charming it would be if it were possible to cause these natural images to imprint themselves durably, and remain fixed upon the paper!” (The Pencil of Nature, 1844).

In a few years, he managed tho catch the images and realized that both, those by contact and those captured by the camera, could be printed on sensitive paper. Thus began production of multiple positive prints from negatives.  As Talbot used to say, photography is “the art of fixing a shadow”.

By early 1839 he had already published a couple of books and several scientific articles, but as Louis Jacques Mandé Daguerre (1787-1851) announced his own invention, Talbot thought there was a risk of missing his discovery. At that time, Amici was in Florence as grand-ducal astronomer and invited Talbot to the First Meeting of Italian Scientist in 1839, so he could introduce his invention.

The exhibition, curated by Silvia Urbini, with Chiara Dall’Olio, in partnership with Fondazione Modena Arti Visive and Fotograﬁa Europea festival, shows materials from well-known international and Italian institutions, for instance, the National Science and Media Museum in Bradford (UK) or the Biblioteca Nazionale di Firenze, from which The Pencil of Nature comes. It’s, the first book illustrated with photographs: Talbot gifted it to the Grand Duke of Tuscany through Giovanni Battista Amici.

The expositive path is devoted to pre and early photographic techniques (including calotypes by Talbot, Luigi Sacchi and Richard Calvert Jones, a daguerreotype by Alphonse Giraud, an engraving by Piranesi…). On show, also shots by contemporary authors, like Paolo Gioli, Luigi Veronesi, Ugo Mulas, Man Ray, Karen Knorr and Franco Vaccari, whose images are linked with the early photography.

According to Martina Bagnoli, director of the Gallerie Estensi, “the exhibition highlights the close relationship between art and science in the first half of the 19th century, while marking the invention of the photographic negative, which is also the discovery of the technological reproducibility of images. A fact that forever changed the relationship between society and images”.

The catalogue of the exhibition is published by Franco Cosimo Panini Editore, Modena.