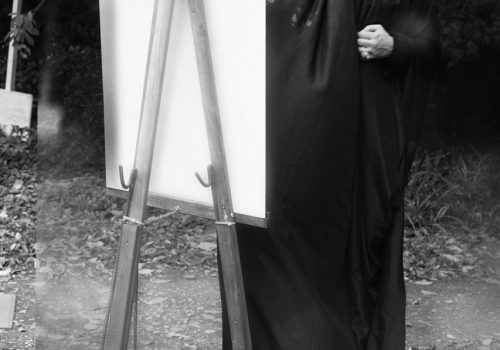 Martin Eder (*1968, Augsburg/Germany) is a veritable multidisciplinary artist. He has been part of the roster of Judy Lybke’s EIGEN + ART since the beginning, and his works have been exhibited worldwide. Most recently they could be seen at Damien Hirst’s New Port Street Gallery and at the new Tokyo-based subsidiary of Koenig Gallery.Besides enjoying international acclaim for his breathtaking paintings, Eder has been creating an impressive body of photographic works, making music with his Black Metal/Drone band RUIN, and practicing tarot readings and hypnosis sessions.As his photographic works particularly caught our interest, we set out to learn more about them and discover “what’s new?”

Martin Eder: My photography has always been an important source of input and a gateway into my universe. It all started out very innocently: I started taking pictures simply as a reference for my paintings. At first, they were very rough and raw but after a while, they developed a certain quality, something that was not usable in painting but held a certain magic for me. They had their own life – there was no need to paint them.

ND: Your first photographic series was called Die Armen (2008). It’s a series of young women displayed in a minimalistic setting, here and there revealing a glimpse of a leather seat or a velvet curtain. What was the initial idea? And how did you come up with this ambiguous title?

ND: Since then, you have been developing various series – some are metaphorically and mystically charged, others are more elaborate with different props and a more involved casting process. Tell us a little bit more about the procedure – from putting together the idea, to finding the right models, etc.

ME: Most of the time I start with no idea at all. I love this jump into a cold river. When the model rings the doorbell, I am totally terrified, with no preparation. Over the years, I grew to enjoy this feeling and have even become kind of addicted to it. I learned to let go and allow things to come to me. This spontaneity might hold the power of a good photo shoot.

I started to speak more with the people coming to be photographed. I learned by doing how to attune myself to the other person’s state of mind, their nervousness, doubts, and anxieties. Now I can manoeuvre the model’s personal situation into a picture. This is where the magic of photography lies for me. Sometimes when I myself am photographed, I feel that same sense of insecurity, especially when the photographer does not really direct the shoot.
Many professionals are spoiled by the quality of their professional models, who are able to look good on every picture. For me, using people from the street is the interesting part of the craft.

ND: You have worked with famous models such as Lily McMenamy and It-Girls such as Leila Lowfire. What were some of the differences in preparing something like that compared to your earlier photo shoots? And how do you explain the special content to the models involved? For instance, in one series where you recreated the theme of Joan of Arc and the Knights Templar, in which you had the models wear suits of armors, chain mail, and medieval weapons.

ME: Most of the time, I start a photo shoot with nude models, and then I dress them with props and costumes. I have a huge archive of all kinds of funny and interesting clothes and props in my studio, so it’s quick and easy to transform a scene. I work very fast, in order not to lose the pace and the rapport with the model. If you’ve created a certain amount of tension and trust, you don’t want to interrupt this, go to the basement, and then come back with props for them to try out. You need to be on spot. That’s why I’m surrounded with my favorite props in the studio all the time. The armor was a part of a concept I started about violence and history. I am fascinated by the orgiastic destruction of battle scenes in art. I think making a work of art is like being in a battle.

ND: In all your art forms, we find symbols of belief and disbelief, religious and pagan symbols, and a lot of magic. Where does this come from; do you see this as some kind of self-exorcism or catharsis?

ME: There is an absolute necessity to believe in ghosts. For those who do not agree, I would like to remind them that we are already surrounded by ghosts. The ghosts of our beliefs – like self-reflection, money, power, brands, age, status – are just a few. Some people are ready to blindly obey those phantoms, to the degree of self-dissolution. Which is the scariest way to believe in ghosts.

ND: Any hint as to where to get such props? Do you cooperate with museums/collections or do you scan flea markets, thrift shops, and antique stores? In case you want to share some of your favorite places, please do.

ME: Most of the props come to me. I don’t use many of them; I just like to have them around in case I need some. I always try to strip the picture to the core of its meaning and expression. Usually the props are just a hypnotic tool to get to a plateau where they are no longer needed but where you can still feel the presence.

ND: During your photo shoots, do you listen to your own music, or whose work do you prefer?

ME: I usually ask the models what kind of music they like. Surprisingly, most of them have a clear idea of what to hear and what mindset they want to be in, which is very helpful information for me in the shooting process. Of course, you can tell by their choice of music what mood they are in. But again, I’m not booking someone who has to deliver – I am inviting a person whom I think is interesting, and then trying to make the most personal picture of them acting in my world.

ND: Do you work with a lot of equipment, artificial lighting, and staff? What environment do you prefer to shoot in: the studio or outdoors?

ME: No, I work with a very special lighting system which I invented and built. I never use flash lights, they just destroy the atmosphere. I really hate them – it’s like a phallic signal, showing the poor model who is in power. People naturally hate flashes; it goes back to prehistoric times, and the experience is stored in their subconscious. In the pictures I want to achieve, we need consent and trust, not stress and escapism.

ND: Tell us a bit about the titles of your works. They seem so narrative, almost like a riddle from the sphinx or the Delphi Oracle. What’s the story?

ME: A title is a picture and a picture can be the title of a poem.

ND: Your latest series TranceLucense is populated with winged creatures, dragons being held in embrace, and other mythical beings. In a recent YouTube interview, you mention The Apocalypse by Dürer, and constantly being in a trance or dreaming state. Do you feel this way? Or is this an artificial act you put out there to be discussed?

ME: I do not feel like I am in a trance, although I know that I am. In hypnotherapy, people need to be taken out of trance sometimes – but then slide into the next one, which is perhaps healthier and more productive. No one is able to be not in trance. Life is itself, reality is a trance.

ND: For all the young aspiring artists out there, what’s your advice?

ME:  1. Forget social media channels, clear your mind from digital pollution.
2. Get your vision started, do not look at the art of others.
3. Use your f*****ng lifetime wisely.
4. Manage your moods.
5. Trust in the good parts of yourself and love your instincts.
6. Magic is in the air.
7. Love what you do.

Museum Arken, Copenhagen 2020, dates to be announced according to current Corona Virus regulations

Staatsgemäldesammlung Glaspalast, Augsburg, in 2021, dates to be announced according to current Corona Virus regulations

Galerie Eigen+Art, Leipzig, in 2021, dates to be announced according to current Corona Virus regulations