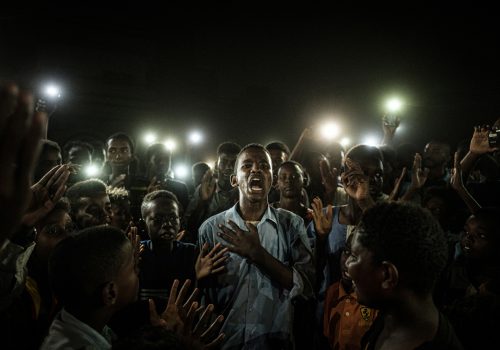 The World at WestLicht! From 11 September global affairs are on view at WestLicht again, when the World Press Photo exhibition puts on display the best achievements in photojournalism of the past year.

“Straight Voice” is the title of this year’s winning image by Japanese Agence France-Presse photographer Yasuyoshi Chiba. It shows a young man, illuminated by mobile phones, reciting protest poetry in Sudan at a demonstration against the military government on 19 June 2019. The scene was captured during a blackout imposed by the authorities to defuse the protests. “This moment was the only peaceful group protest I encountered during my stay. I felt their undefeated solidarity like burning embers that remain to flare up again”, recalls Chiba.

After several months of protests, Omar al-Bashir, Sudanese dictator for thirty years, was removed from office in April 2019 by an army coup and replaced by a military government. Protests however continued, calling for power to be handed to civilian groups. The authorities responded with violence: Only days before Chiba took the photo, government forces had opened fire on unarmed protesters and scores of people had been killed. In August, the military and the pro-democracy movement eventually signed a power-sharing agreement.

Close to 4.300 photographers had applied for this year’s awards with nearly 74.000 images. The jury awarded 44 prizes in eight categories. The topics in the exhibition range from the catastrophic bushfires in Australia, the clashes between Chinese authorities and the democracy movement in Hong Kong and social unrest in Chile to the tiger kings in the USA.

It is the nineteenth time in a row that WestLicht hosts the World Press Photo exhibition. As icons of the recent past, the awarded images and photo series form a unique retrospective of last year’s events, covering topics from the areas of politics, society, sports and nature. In 2019, the exhibition had again more than 30.000 visitors.

“Photojournalists take high personal risks on a daily basis, oftentimes putting their health and ultimately their lives in danger, only to keep us informed about what is going on in the World. In times like these, where travelling is restricted for most of us, the importance of these first hand reports becomes even more evident. Every year, the World Press Photo Awards not only set the benchmark for excellence in photojournalism, they also put the spotlight on the photographers, who, in the constant stream of daily news we sometimes tend to overlook”, says WestLicht chairman Peter Coeln.

Since 1955, the World Press Photo Foundation, an independent platform for photojournalism based in Amsterdam, has organized the World Press Photo Contest. Each year a different jury judges the entries from all over the world. The result of this competition, the most prestigious in the field of press photography, is the touring exhibition which is presented in more than 120 cities across the globe.