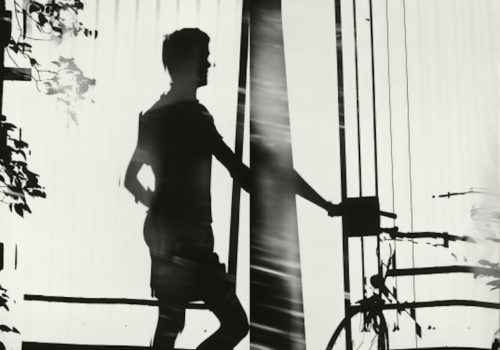 . John Chiara
John Chiara travels the California coastline with a room-size camera obscura of his own creation hitched to his car, capturing landscapes and urban vistas directly on photographic paper. The large size of his hand-built camera allows him to create monumental work without the use of an enlarger. Chiara’s elimination of a negative makes his process immediate and unique, but also time intensive with exposures lasting many hours. He incorporates deliberate strategies of chance into his work to invite exposure and processing anomalies. He also experiments with auto-reversal paper, creating images in which light and dark are reversed and colors are transformed into their complements. His revisionist and surreal landscapes include skewed perspective, tilted horizons, radical over and under exposure, and jarring color shifts that produce refreshing and unexpected imagery. Immediate, intuitive, and experimental, Chiara’s work is unique among Contemporary photographers. Chiara’s photography has been reviewed in the Washington Post, The New Yorker, and Artforum. The Los Angeles County Museum of Art recently purchased his work, and, in 2011, the Pilara Foundation commissioned his Bridge Project for their permanent collection.

. Klea McKenna
Klea McKenna uses light sensitive paper to reveal something unexpected about the natural world, transforming familiar elements into abstractions of light and form. She experiments with a number of strategies, including hand-made cameras and outdoor photograms to create images that convey a sense of place that is both visual and emotional. Her rain study photograms are composed outdoors at night in her native Hawaii and her current home in Northern California.
McKenna has exhibited over the past decade across the United States, including group shows at the Museum of Photographic Arts in San Diego, the Marin Museum of Contemporary Art, the Woodstock Center for Photography, and the Philadelphia Photo Arts Center. Her work has appeared in Esquire, the San Francisco Chronicle, National Geographic, and Art News.

. Floris Neusüss
The German photographer Floris Neusüss has been a pioneer in camera-less photography since 1954.  He has explored the technical and visual possibilities of the photogram, pushing the technique to create a groundbreaking body of innovative work. He initially came into the public eye in the 1960s with his Körperfotogramms or “nudograms,” photograms of nude women. These images of ethereal silhouettes in graceful poses were created by laying models on photographic paper.  More recent work includes his Nachtstücke (Night Pieces) created outside at night, often in a garden, by exposing photographic paper to lightning or to an electric flash. The resulting images of ghostly leaves and shrubbery are wind tossed and speckled with dew, reflecting the outdoor conditions of their production. Hovering between abstraction and representation, these pieces are portraits of the mysterious natural world at night.
Neusüss has shown internationally over the past fifty years, including exhibitions at the Los Angeles County Museum of Art, the Victoria and Albert Museum, the Denver Art Museum, and the Art Institute of Chicago. Several monographs on Neusüss’s work have been published, and he was a subject of an expansive illustrated volume produced in conjunction with a 2010-11 Victoria and Albert exhibition on the work of five camera-less photographers.