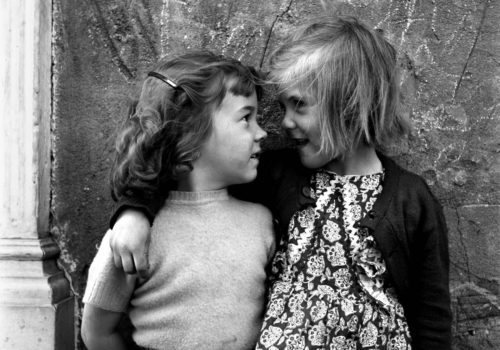 Last year’s photo discovery of the year is now accessible to all thanks to the release of an exceptional new book and a current New York exhibition. Vivian Maier, Street Photographer is the simple story of an unknown street genius.

A year has passed since the discovery of Vivian Maier’s work shook the pantheon of last century’s photographic greats. What remains to be said, except that her pictures are an ode to the street, neighborhood storytelling, where there is no story, simply daily life by the hundreds. Yes, Vivian Maier equals William Klein for her incisive eye, or Cartier-Bresson for her rigorous framing. But this American also judged things and people with kindness, humor, and poetry. A sensitivity that Vivian Maier spent her life expressing in a small square.

These pictures straight from a Rolleiflex were discovered in 2007 by the young real estate agent John Maloof when he bought a box of negatives at an auction hoping merely to discover pictures of his hometown, Chicago. He would nurture the treasure – a total of 100,000 pictures, one third undeveloped – for an entire year while trying to find the pictures’ owner. But one day his online research led him to the obituary describing Vivian Maier’s death the day before, at 83. It was April, 2009, the photographer vanished with her work’s secrets, a work she never shared, perhaps not even with her family. She would however bequeath the pleasure of discovering a life in pictures, her strolls, pauses, or encounters. Whether she likes it or not, her work is now the object of a book, a traveling exhibition, a website, and a blog written in her memory.

Before becoming a lost virtuoso, Vivian Maier, half French by her mother, always in a hat with a camera around her neck, worked as a nanny in Chicago, then New York, then Paris. That is where she discovered the beauty of a gait, the originality of the other, laughs, tears, children’s games, the stares of others, white, black, old, anxious or endearing. Nothing exceptional in the scenes she chose to immortalize, they simply reflect a touching and romantic vision of life and contribute to our collective memory. Vivian Maier reminds us all, photographers or photography lovers, that the simple shot of a man sleeping on a beach remains an extraordinary document.