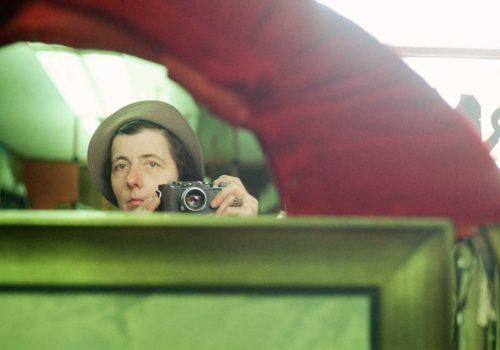 For the first time, the Musée de Pont-Aven and the Musée des Beaux-Arts de Quimper are joining forces to present an unprecedented exhibition on Vivian Maier in Brittany, in two locations, with nearly 250 photos.

Vivian Maier (1926-2009) of French and Austro-Hungarian origin, was born in New York. In her youth, she stayed several times in France. It was at the age of 25 that she became a nanny in New York, then in Chicago until 1990. She died in poverty and loneliness in the spring of 2009.

Her photographic corpus was discovered at the end of 2007 by John Maloof, a real estate agent who then discovered the qualities of the artist who had remained anonymous all her life. Little by little, an incredibly rich and original body of work was revealed, made up of more than 120,000 photographic images, super 8 and 16 mm films, various recordings, scattered photographs and an impressive quantity of unprocessed films.

Since the distribution of her photos and films, about ten years ago, Vivian Maier has been recognized as one among the greatest photographers of “street photography” in the same way as Diane Arbus, Robert Frank or even Helen Levitt or Garry Winogrand.

Homogeneous and structured, the work of Vivian Maier revolves around recurring themes that she explores at leisure.

At the heart of her original concerns, the street scenes of New York and then of Chicago, the working-class neighborhoods abound in the work of Vivian Maier: they can be discovered at the Musée des Beaux-Arts in Quimper.

In a fraction of a second, she immortalized snapshots of the life of complete strangers, of anonymous people with whom she shared a common destiny and humanity. Gestures, details, a look, a situation, nothing escaped her Rolleiflex which allows her to remain discreet. The world of childhood inspired her and filled her gaze.

In Pont-Aven, self-portrait, a real leitmotiv for Vivian Maier and never explored in France in its entirety, is in the spotlight, the embodiment of the desperate quest for one’s own identity. Duplicating herself, it subtly mixes games of shadows and mirrors, reflection(s) of herself, she handled with great skill angles, details, light and framing. These self-portraits raise questions: are they not for her a way to express one’s relationship to the world, stageing oneself while remaining enigmatic? Reduced to a form of invisibility, even social negation, she nevertheless tried to keep track of her existence in a world unsuited to her person… or the reverse.

Declined in multiple variations and typologies, her self-portraits form a language in itself, a complex codification integrated into her overall work. Six completely new self-portraits specifically chosen by Anne Morin, scientific curator of the exhibition, are presented at the Musée de Pont-Aven.

Black and white in its beginnings, her photographic practice integrated color in the sixties conferring a very innovative character to her work.

Curious and eager for new means of expression, she tried her hand at the cinema, with her super 8 or 16 mm camera. Vivian Maier fixed the circulation of her gaze in space thanks to the camera, in search of a frame or of a photographic scene.