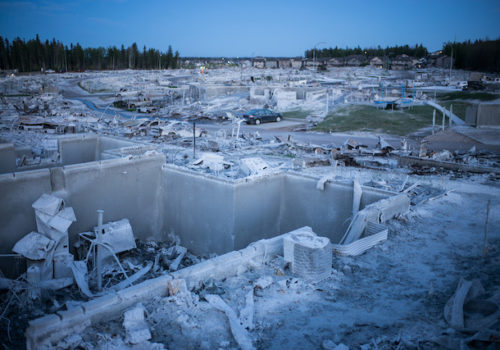 The 32nd edition of the festival has six exhibitions focusing on environmental issues. From plastic pollution to deforestation, the themes are as varied as the photographers who worked on them.

September 2019, September 2020. Twelve months rich in twists and turns, upheavals and havocs against the backdrop of the pandemic. There were no shortage of options for Visa pour l’Image, the meeting place for news-oriented photojournalism. But for its 32nd edition, the festival has chosen to focus on another hot but low-intensity subject: damage to the environment.

Of the festival’s twenty official exhibitions, six are devoted to environmental topics (not even taking into account Ronan Donovan’s arctic wolf photo series). Enough to provide a quick overview of the state of the world. They are an opportunity for visitors to observe the different ways of dealing with subjects sometimes close to each other.

With Victor Moriyama, the pictures take height to bear witness to the deforestation underway in the Amazon. The Brazilian photographer plays with an alternation between green tones (the forest) and orange (fires, cleared land), between aerial photos and shots at ground level. Shocking photos, at first glance, for a theme that has become sadly classic.

James Whitelow Delano’s photographs share the same force. Dogs, a pig or a monkey disappear in the middle of an ocean of colored plastic bags. From Filipino neighborhoods to Indian rivers, everything natural seems to be buried under a thick layer of plastic. The American photographer has tracked down rubbish in the wildest corners of the world, like Rinconada, the highest city in the world, he plays with the contrasts and the feeling of incongruity. “It’s disgusting, but he manages to make it almost beautiful,” said Daniel, a retiree who is a regular of Visa, amazed.

Ian Willms offers an ambitious topic around the exploitation of oil sands, destructive of the environment, on which the First Nations of Canada depend. His images are bathed in twilight light. Strong geometric lines emerge from it: the right angles of cuts and suburban houses, the alignment of pipelines, the regular curve of reservoirs. Faced with the relentless industrial machine, humans are sick or dying, surrounded by their grieving families.

Unlike the photos of Moriyama or Delano, where the men are lost in the vastness of the space or in the face of the scale of the problem, the images of Elena Chernyshova give pride of place to the victims. Here, they are the inhabitants of the Sicilian region of Augusta Priolo, where one of the most important petrochemical centers in Europe is located. The rates of cancer and malformations have exploded there. A report on a little-known situation, the exhibition is valid as much for its chilling captions as for its photos of refineries emerging from ghostly mists.

Constants emerge on the exhibition route. Some are graphic. Photographers talent aside, images of Indian plastic from Bryan Denton’s exhibition (“Drought and Flood”) could appear in James Whitlow Delano’s. Same family resemblance between the refineries photographed by Ian Willms and Elena Chernyshova.

There are other similarities in the subject matter of the reportages themselves. Like Ian Willms, Sarah Caron and Bryan Denton explore the risks that pollution and climate change pose to a culture (that of India or the Mohana people) and play on the gap between images. At the entrance to Bryan Denton’s water exhibit in India, two side-by-side photos show two people alone, from behind. A little girl alone on the cracked earth and a man in a flooded street. They provide the framework for a dialogue, between absence and overabundance. With the photographs of Sarah Caron, the contrast strikes this time between the past prosperity of the Mohana fishermen, and the decline of those who, for lack of fish, return to the land. Six looks, six treatments of the same emergency.