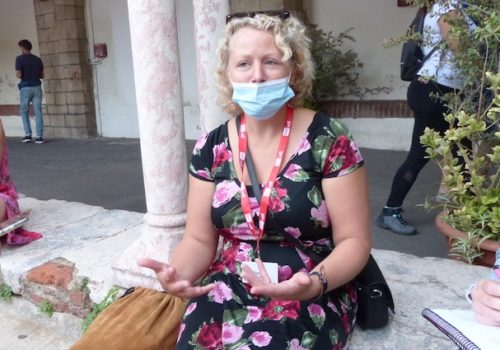 Cuba’s critical shortage of running water is at the heart of photojournalist Sanne Derks’s work. An anthropologist who became a journalist in 2015, this Dutch woman has her first exhibition at the Visa pour Image festival. Encounter.

With a doctorate in anthropology, Sanne Derks, a 40-year-old Dutch photographer, has made a few documentaries as an amateur. Then she realized in 2015 that what she lacked was “a sens of the visual”. It was then that the conversion took place. “I quit my job as a psychology professor, and did a one-year master’s degree in photojournalism in Barcelona. I started out as a freelancer, and I learned by doing, ”she explains.

This is the fourth time she has visited Visa pour Image, but the first as an exhibitor. Through her exhibition “Manifiesto del agua”, she illustrates the problems associated with drinking water in Cuba, an island that she loved on her first visit in 2005. “At the time, I often saw people with buckets, but I wasn’t sure exactly what the problem was. ”

She explored the question in a photo reportage in 2017, her first publication in the international press. “This was only the visible side of a deeper problem, so I wanted to investigate,” adds Sanne Derks. In 2019, when access to water became a human right recognized by the island’s new constitution, she returned to Cuba. This time, she wanted to understand how the right to safe drinking water is implemented and find out about everyday life in this communist state.

“In the street, I could do everything”

Because of the authoritarian regime, Sanne Derks was denied access to institutions and businesses. “But in the street, informally, I was able to do everythingI wanted. I was able to talk to workers and residents, even though I was told negatively many times. ” For that, she indicated that she was a photographer and not a journalist. “People are afraid of the word ‘journalist’”.

Her photos shed light on the Cuban D system of water management: health workers check the quality against the proliferation of bacteria, residents supply the tanker with buckets, and fish are used to eliminate the mosquito larvae in cisterns. The aging piping system is not always reliable: cuts, leaks or poor water quality are common. “But I wanted to show a more nuanced view of Cuba. Even if there are limits and problems, people get by, they find solutions.”

A gap between locals and tourists

Among the Cubans she met, some even became her friends. “I would never have met them without this reportage,” she says. No slouch in sympathy and human warmth, the female photojournalist Sanna Derks has never felt uncomfortable there. “I could interact with men without inappropriate remarks or fears. I went up with the truck drivers who traveled the city in tank trucks. I knew nothing was going to happen. Cubans are gentlemen ”. A feeling contrasting with her Bolivian experience, where in response to her journalistic requests, she received “you have beautiful eyes” or “come have a drink”, from the gentler ones.

However, for the photojournalist, Cuba remains “a strange country”. In a state where resources are common and shared, tourists are set apart. “As a photographer, you have a different vision than as a tourist,” says Sanne Derks. The exhibition highlights this significant contrast between tourists’ need for comfort and the reality of the street, a few meters away. The heated swimming pool on one side, the locals crudely fixing the pipes on the other.

Sanne Derks has normally scheduled a third visit to Cuba to continue her “Manifiesto del agua” project, which she believes is not yet finished. But nothing is certain yet. “I would like to make a book with my photos, but I need the money to do it, and I have to think about what it will be, if it can be achievable.” The photographer is always learning on the job, so if the work is carried out, her new challenge will be to focus on portraits, movements or details. “But I want first to be sure of what I want to convey with this book.”