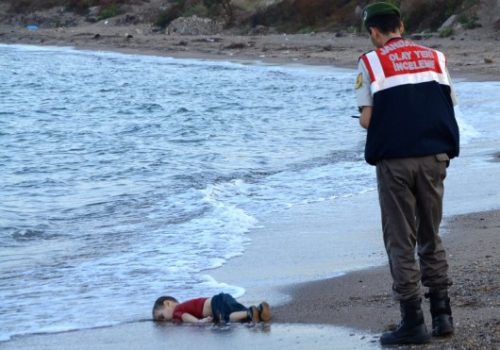 Visa pour l’image ends the summer with its comforting rituals: the first week of September, the slim and black frames of the photographs closely ranked, meetings at the Café de la Poste, red bracelets, the full to capacity evening projections at both Campo Santo or place de la République. This year, Jean-François Leroy opened his editorial with the following sentence: “We have been telling it for years”. We are not in Perpignan to make discoveries; we are here to make celebrations. The exhibited, rewarded and projected photographers actually play in the big leagues and this is probably the reason why projections are so popular despite their hair-raising music.

Whereas each evening period referring to the year’s events backtracked the morbid economy of immigration while showing abandoned or wrecked boats and a great number of bodies, the projection of Wednesday was punctuated with a single image, published the same day by The Independent associated with the following comment, taken over by Jean-François Leroy: “If these extraordinarily powerful images of a dead Syrian child washed up on a beach don’t change Europe’s attitude to refugees, what will?” The image and decision to publish it remind of the very impact of photography and, in the interstices, the role of publishers in their ability to work on public opinion and politics. Editors help supporting photographers and journalists while giving meaning to their commitment. There are those who have caught on well to this. Suffice it to read the pages of Marie-Claire since they are directed by Elsa Guiol. As an answer to the persons who believe and pretend, with pursed lips, that this is the end of photo editors, while declaring that due to self-publishing platforms such as Instagram, photographers shall not need them anymore, Visa pour l’image responds that they are more than ever essential, across all media.

Projections are also the barometer of the market in terms of financial opportunities: awards, news, portfolios and books; they are alternative sources of dissemination to challenge the economic difficulties of photojournalists. At the conference organized by the SCAM for the launching of its study, darkly titled “The black book of photojournalism”, Pierre Morel, who is a photojournalist and a member of the UPP, was proposing as a solution the end of individualism. Visa keeps fulfilling this collective commitment.