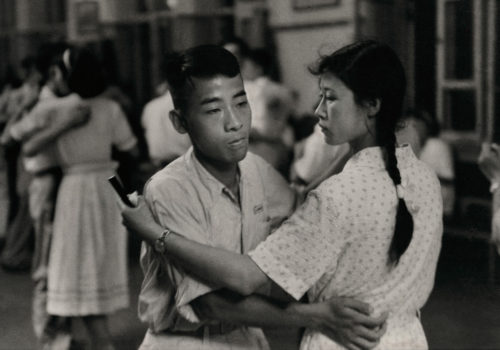 I secretly celebrate this first success in doing what I had come to China for — photographing in my own way and on my own terms these people who number a quarter of mankind.

This quote is from Tom Hutchins’ unpublished manuscript titled ‘The Bridge at Shumchun’, about his crossing into China from Hong Kong on 9 May 1956. Encumbered with bags and camera equipment he was anxious about the formal requirements of entering Communist China which was then closed to most of the world.

‘On the platform there are many people waiting to cross the other way, waiting for the train back to Hongkong’ he wrote. ‘No one seems to mind having their pictures taken, and the attractive girl who sends off my cable from a raised bureau in the middle of the platform blushes and smiles with charming embarrassment as I focus closely on her, and a few smiling people gather to watch. As she looks up tables and concentrates on getting a few words away to a strange place called New Zealand I keep my camera busy, and behind it I secretly celebrate this first success in doing what I had come to China for—photographing in my own way and on my own terms these people who number a quarter of mankind.’

Not surprisingly, some of his first photographs were relatively tentative and did not get included in his eventual master list, but they were an essential warm-up for the four months of non-stop activity that followed.

‘With the ice broken’, the 34-year-old New Zealander and new father continued, ‘I turn my camera on kiddies playing around the seats, people resting, posters asking for more production, more education, better health. And then the patient Mr. Wong reminds me of the customs formalities. With apologies for the necessity and trouble to take the numbers of my five cameras the customs officer takes my word for the amount of film I have loaded into my bags. Provided I can assure them that I will not sell or give away any of the film there is only one form to be filled  in triplicate, and I am free to have a fine lunch of chicken, vegetables and rice with delicate [jasmine?] tea.’

Tom did not stay long in Canton (Guangdong), which is the area most of New Zealand’s early Chinese migrants came from, because he planned to come back later, and did so in September. By then, however, the Chinese authorities thought he was asking too many difficult questions and cut short his six months visa by six weeks.

Tom was in China as an independent free-lance photographer, because although he was Chief Photographer at the Auckland Star, the liberal evening newspaper dropped him after hearing late in April 1956 that the People’s Republic of China had finally issued him a visa. This was New China’s first nervous period of opening up to foreigners, when the Cold War was firmly in place. Although New Zealand did not go so far as the United States, which banned its journalists and photographers from visiting China, it toed the Capitalist world’s anti-Communist US line. Tom had earlier hoped that his wife Florence could accompany him, but like his first concept of following China’s “Mother River” (the Yellow River) from its western mountain source to the eastern sea, formal restrictions and practicalities prevented that. Nor could he go to Tibet or near the border of Vietnam or to the south east coast where China and Taiwan were still bombarding one another. Being allowed into China at all, after several applications, seemed a minor miracle.

Later, following events in China from a distance he had been appalled and highly critical of some of the developments he learned about leading up to and including the Cultural Revolution of 1966-1976 and since. And he feared for the lives of people he had met and interviewed in China who had been jailed for one political reason or another or disappeared from view. The social progress and dawning of intellectual liberation he had witnessed and approved of as a socialist, pacifist and humanitarian, seemed to have withered on the vine, and his requests to return to China were not granted.

Among the disintegrating cardboard boxes of damaged papers, publications and manuscripts found by Mala Mayo and myself under Tom Hutchins’ Remuera, Auckland house early in 1989 were around 600 rotting Agfa Brovira 8×10 inch prints made for his intended book on China. We could not find his negatives, which appeared lost but were rediscovered several years later, in good condition, inside Tom’s house. But all that is another story.

Life magazine had first published his work in January 1948, two months after his 26th birthday, with a composite panorama of the fatal November 1947 fire that gutted Ballantynes department store in Christchurch. He was a new member of the Black Star picture agency in New York, and had the support of Time/Life’s editors for his potential China scoop, as the first non-Communist western photojournalist to cover revolutionary China since Henri Cartier-Bresson. Cartier-Bresson himself, and members of his Magnum agency’s team, including Marc Riboud, Brian Brake (perhaps New Zealand’s best-known photographer), René Burri and Hiroshi Hamaya, were all to follow Hutchins in 1957 and later. Consequently, Hutchins’ work, which covered aspects of the Soviet influence, as well as Xinjiang Province for the first time, fills some of the gaps in the documentation of the period by outstanding foreign photographers.

Before he died at the age of 86 on 15 March 2007, he and I completed, after two decades of spare-time work, a master list of his choice of his most significant photographs of China. Archival proof sheets and around 600 archival 8×10 new prints were made under his critical supervision. Since then, those prints have been scanned along with many of his selected but unprinted negatives, from which to make archival digital prints as and when required. This, the first exhibition and publication of Tom Hutchins’ China essay is drawn from the 600 plus images he chose as his master list, to start to honour his status as an independent eye- witness and participant-observer of a new nation in the making.

Life assisted by processing and filing most of Hutchins’ films for quick retrieval. A nine page, 22-image essay was published in the 21 January 1957 U.S. edition of Life as ‘Red China on the March’ and also in their international edition of 28 February 1957.

Tom wanted his photographs to speak for themselves and was concerned that others (including myself, I think) could easily distort the meaning and raison d’être of his images — the “visible evidence” he set out to record. He wrote only one short retrospective essay about this body of work which I am saving for a more comprehensive China book.

Since then, for the past 60 years, this remarkable photographic record of revolutionary China has been out of sight and out of mind. Tom had lost interest in it when he could not find a publisher for his book in the 1960s and other more compelling personal and work issues got in the way. These interruptions included founding the first full-time academic courses in film and photography in the British Commonwealth. He taught both media at the University of Auckland’s Elam School of Fine Arts, from 1965 until his retirement in 1980 and was a highly influential teacher who demanded high standards from his students and staff.

Some time in the 1960s he wrote the following note trying to wrap up the essence of his China work for a potential publisher. His book, he wrote is ‘A picture record from a four- month journey through China—from the personal point of view of a humane but not uncritical observer more interested in the visible evidence from accessible aspects of Chinese life than in imposing self-expression on a foreign background.’ He was, I think, attempting to describe the all-important point of difference between his approach to China and that of already published foreign photographers such as Henri Cartier-Bresson and Brian Brake, whose work he may have thought, in other words, was a little too subjective and too “arty”. Be that as it may, Tom’s own work can be seen now, and more time might tell.

The world’s first exhibition of this work was shown at the Pingyao International Festival of Photography, Shanxi Province, in the People’s Republic of China, from 19 to 25 September 2016. The exhibition coincided with the publication of a bi-lingual book, Tom Hutchins Seen in China 1956 by Turner PhotoBooks, Auckland/Beijing in collaboration with PhotoForum Inc, NZ, as PhotoForum issue 86. (ISSN 01110411, available from RIM Books, NZ: [email protected] only in softbound.)

The images and quotes are copyright of Tom Hutchins Images Ltd, New Zealand, for which I am the voluntary Projects Manager. As I write there are nearly 1,000 of Tom’s China photographs available for reference and study on my website: www.jbt.photoshelter.com. More will follow until, eventually; most of the 6,000 exposures he made can be viewed online. I also look forward to collaborating with other writers and curators interested in analyzing and presenting this work within the broader context of the history of China and the evolving histories of photography that are enriched by the unexpected rediscovery of outstanding practitioners like Tom Hutchins.

John B. Turner is a photographer, writer, curator and historian, based in Beijing, China.