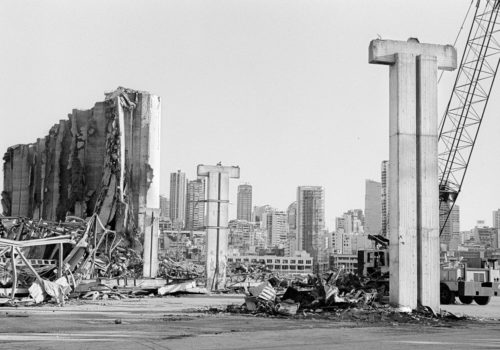 “When Thibault Lefébure goes to Lebanon in the fall of 2020, he intends to cover a protest movement that began a year earlier. At the outset, students and workers, from various social classes, demonstrate in the same spirit. Faced with severe water and electricity shortages, they are calling on the ruling class to restore quality public services. They are calling on the political class to put an end to corruption. They want, at last, their country to come out from the economic crisis in which it is bogged down. A year later, faced with the immobility of the ruling classes, anger increased. But the movement ran out of steam. It was necessary to resume work to ensure livelihood. Some, who could afford it, have left the country, others still want to fight, many are torn.

“Where to? “Asks the photographer, observing the strangely lonely Lebanese in their struggle. “Where to? », Seems to be wondering this young Lebanese, arms crossed, as resigned. The question, in its different meanings, echoes the polysemy of the photographer’s silver images, the infinite range of his grays. Where to go after so many lost fights? What to do next? What meaning should be given to this struggle? The apocalyptic backdrops photographed may embody the impasse in which the country finds itself. But, in the distance, there is the city standing. Elsewhere, laundry is drying in the midst of the ruins. It may not be entirely absurd to hope.

Despair, however, has many reasons to take everything in its path. Like the blast of the explosion on August 4, 2020, which destroyed much of the port of Beirut and its neighboring districts. 2,750 tonnes of ammonium nitrate had been stored in one of the hangars in the port area for years. This nonsense can only be explained by the incompetence and corruption that plague public services. It is the ruins caused by this explosion that Thibault Lefébure photographs, alongside the demonstrations.

No sensationalism in the shots of the photographer. For him, hyper-realism is out of the question. This does not mean that we should refrain from all aestheticism. The three formats present in this exhibition – panoramic, square, 24×36 – reflect the care taken in the framing. Never free though. Like these blurring effects applied to processions of demonstrators, whose perspectives are also blurring.

The variety of formats, the mix of scenes of demonstrations and ruined landscapes, the temptation of abstraction against the desire to tell a story bear witness to the unique look that Thibault Lefébure has on the city of Beirut. The hybridity of the narrative and the use of film do not make the exhibition “Where to?” »A simple photo report on a wounded country. At its heart are expressed the questions of an author photographer in the face of a people whose hopes rub shoulders with the abyss. ”