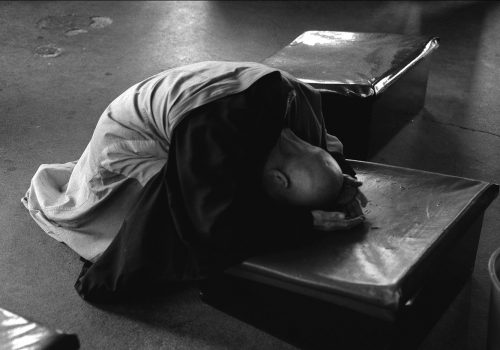 Vagabondage is “the act or habit of wandering, being a vagabond.” Until 1994, the state of vagabondage was an offense for any person “with neither a residence nor means of subsistence and who consistently has no job.” By nature, photographers are vagabonds, hanging around a bit everywhere and especially meddling in what doesn’t regard them, setting their sights on everything and nothing, or on just about anything. For that matter, is being a photographer a real “job” or rather a state of mind, a “state of imagination” ?

Four vagabonds, three men and one woman, went off to look for wonders at the four corners of the world or, even closer, just around the corner on the banks of the Seine or a deserted street on a winter night. “The elsewhere and the distant” of these artists is everything and nothing at the same time. It is simply life: a look, an emotion, a gesture, a poetic adventure, a fleeting moment. It is an exhibition at Galerie Le Voleur d’Images in Paris.

Edouard Boubat asked a good question: “How do you find what you’re not looking for?” Between the chance encounters at the Jardin du Luxembourg or on the banks of the Seine, in the distant lands of Asia (like Japan or Nepal), the quest is always the same: “the real subject is a bit of yourself, a kind of absolute.”

Jacques Henri Lartigue – as a happy, light, and even a bit flighty vagabond – liked to capture life’s small pleasures: a jumping dog or a pensive woman in a calm sea. He captured the simple moments of refined life: a pretty woman at a restaurant table on a summer day, a child blowing bubbles. A dilettante in a world where it was “beautiful”, “very beautiful”, or “very, very beautiful” every day, Lartigue gives us moments of an enchanted world.

Marc Riboud, as he liked to say, “has seen the world.” as a wanderer rather than a traveler, “sensitive to the beauty of the world,” he did not cease to look for the joys of life: a street scene, a portrait taken unexpectedly, and a thousand other things. With “immense pleasure,” he photographed the world’s beauty.

Finally, Sabine Weiss photographed “to conserve the ephemeral, to freeze chance, to keep an image of what is going to disappear.”   In a mixture of tenderness and gravity, her portraits weave a humanity that praises life to better capture the very moment when it is going to disappear. “The photographer is linked to the moment, this wonderful, fleeting moment that needs to be captured.” The depth of her images earned her a chance to participate in the New York MoMA’s mythic exhibition The Family Man in 1955.