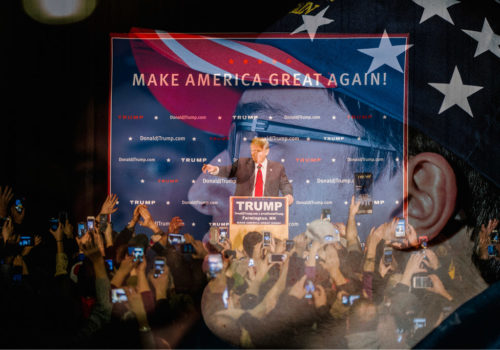 The Fourth Annual “New York Portfolio Review” sponsored by the New York Times LENS Blog and the City University of New York’s (CUNY) Graduate School of Journalism, took place over a recent weekend. Leading editors, museum curators, book publishers and gallerists reviewed the work of 150 or more photographers chosen out of over 2,500 applicants. All kinds of photographic work — from fine art to photojournalism — was included and the reviews are completely free for all photographers chosen to attend. From a Reviewers standpoint, the quality of the work is extremely high as the work has been screened by top photo professionals.

Mark Abramson (b. 1988) is a Russian-American freelance photographer and filmmaker based in New York City. His series “Two Face”are multiple exposures from the American Election Campaign Trail. Ruth Kaplan is a photographer based in Toronto.  Her work explores social behaviour manifested through physicality, in a wide variety of rituals. Marina Black grew up in Moscow, Russia. Originally studying History and Painting, since moving to Canada, her work includes photography, drawing and installation. Ten years in the making, Nazik Armenakyan‘s “Survivors” is an elegant ambitious photographic narrative about surviving victims of the Armenian genocide, which includes portraits, interior scenes, witness testimonies and archival photographs. Manca Juvan‘s recent long term-photo project “Guardians of the Spoon” focuses on preserving memory of the relatively unknown Italian Fascist Concentration Camps. Currently based in Brooklyn, Andre D. Wagner makes photographs which encapsulate American life and its social landscape, drawing inspiration from some of his predecessors—Roy DeCarava, Robert Frank, and Garry Winogrand. Louisa Marie Summer, born in Munich, is an artist and documentary photographer currently based in Brooklyn, NY. She examines issues of social structure, inequity, identity, and survival most recently in Ukraine and Romania. Frank Relle, born and based in New Orleans, Louisiana, work is included in the collections of the Smithsonian Museum of American History, the New Orleans Museum of Art and the Museum of Fine Arts Houston. Brenda Biondo‘s book of photographs, “Once Upon a Playground” was published by the University Press of New England. A native New Yorker, she lives in a small town near Pikes Peak, CO where the light continues to inspire her work. Matt Lutton is an American photographer who splits his time between his hometown of Seattle, WA and Belgrade, Serbia. Noel Camardo grew up in downtown New York City, and lives in Brooklyn with his wife, painter Caris Reid, while working on his his artist residency in Corsicana, Texas. Amy Jorgensen’s series, “Something Blue”, was inspired by her Great Aunt who was a suffragette in New York City in the early part of the 20th century.